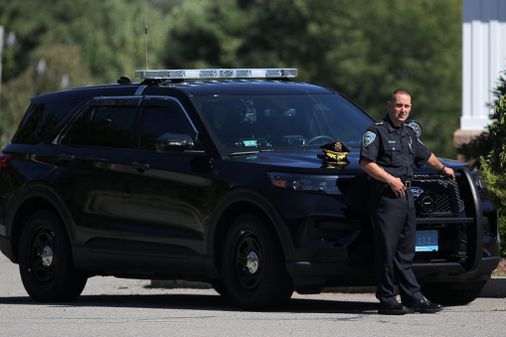 “The police brought me back to life,” he said of his three-month-premature birth. “It sounds like a far-fetched story. But it’s true. And then over the years, having the medical issues I had, the police were always at our house. The first responders.”

And so, it seemed like the trajectory of his life was set early.

“I always wanted to be a policeman,” he told me when I sat with him in his office here the other day. “That’s all I ever wanted to do.”

And so, he set a course. And kept his nose clean. He kept his eyes fixed on the future.

“Because there was always this thought: you can’t do something like that because you won’t make it as a cop if you do.”

And that focus, that determination, that sharp focus is why this former part-time Ashburnham Police Department dispatcher now wears the uniform of chief, the head of a 17-officer department in this town of 6,300 north-central Massachusetts.

“He always had that goal and nothing was going to stop him,” said Susan Brennan, who works at the police department here as a dispatch supervisor. “You could just see it in him. For others, it’s just a job. It’s more than a job for him.

Conrad grew up in South Windsor, Connecticut, 11 miles north of Hartford. He was a student who collected B and C grades and balked at the thought of going to college.

“But I knew I had to do it,” he said. “And it was one of those things where if I didn’t go back to school, I wasn’t going to. So, I found Anna Maria (College) and went to criminal justice.”

His friends would describe him as an upright man. And drives.

As a freshman, he joined his local fire department to gain the valuable and essential experience that accompanies emergency situations.

“I just wanted to get out there and see what it’s like to make emergency calls,” he said. “Because you don’t know how you’re going to react or what you’re going to see.”

As he learns his trade, he takes on odd jobs. He worked for two years as a radio DJ in Hartford, playing alternative rock from bands like The Black Keys, Oasis, Cage the Elephant and Foo Fighters.

In the meantime, his real job came calling. When he became supervisor, he couldn’t just drop things and head to Hartford and the mic. So he signed. And stuck to police work.

He was determined to make it work.

“The question has always been: do I have the strength for this? he told me, recalling those early years. “I’m a short guy – 5ft 6in. I weigh 140 lbs. I always do the same size. The personality of this job is that of a big strong guy. Can I take care of it physically? Can I handle it mentally?”

The answers to these questions would come on the job.

“It’s been on my mind throughout my career,” he said. “I’ve been in more fights than anyone because people challenge you because they think you’re not going to do anything.”

But that didn’t stop him.

“I was the kid who never fought,” he said. “I got along with everyone. And now you’re the one telling people what to do. And people want to fight you. So it’s a tough mental thing to deal with when I’m such a nice person.

“How do you change that? Oh, ‘OK, now this guy is going to try to fight me.’ It’s more common than you might think. I mean I was in a pretty good fight a month ago. I was just there to support a guy. And, before you know it, this guy pulls out a knife. I have a picture of him. And we were calling for help.”

He had been there before. I had to deal with bad guys and bullies. He learned how to defuse explosive situations. He learned to commit when other options evaporated.

And now he’s learned what life is like at the top of the department where he honed his craft.

“It’s not a job,” he told me. “It’s a way of life. Everyone is watching you. People will say to me, ‘I saw your daughter’s tricycle was in the front yard.

“They watch everything you do. And it’s not ill-intentioned. It’s just that’s how some people have a conversation with you. “Oh, I saw you took out your GTO yesterday.” I didn’t even know you knew where I lived. But it’s a way for someone to connect. So I don’t see that as a bad thing.”

No, it comes with the job. It’s part of life when you wear a gold badge and the main emblem on your collar.

He said his wife, Ellen – a trained emergency medical technician – has adjusted to being married to the best cop in this town.

“She saw me become a sergeant and a lieutenant,” he says. “She is proud of me. She gave me this necklace. There are the names of our children on the back. It says “chief”.

She gave him a similar gift when he was promoted to lieutenant.

It reminds him that he’s not just the chief of police. He is also a father to 9-year-old daughter Kadie and 7-year-old son Chase.

“I’m glad we have such a good department,” he told me. “These guys trained me. These guys are proud too. They say, ‘I remember when I trained you. You were a 22 year old kid in college and now look at yourself. You are my boss.”’

And the chief of police, the guy who, after 22 years as a part-time dispatcher, full-time cop, sergeant and lieutenant, is now the top cop.

“Twenty-two years later, no one can really say that. It’s neat. I am happy.”

Thomas Farragher is a columnist for The Globe. He can be contacted at [email protected]