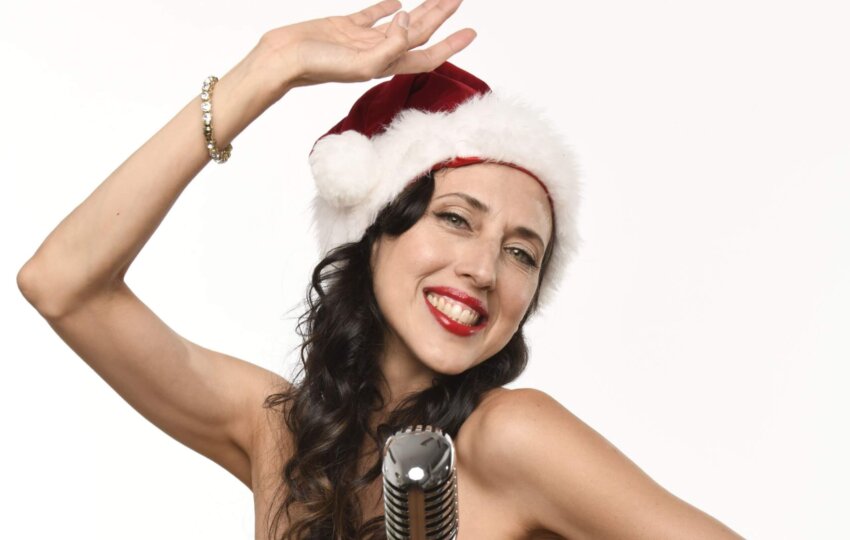 Eight albums in her pocket, the multi-talented musician / actress Patricia Vonne is back with a new recording. This time it’s her holiday celebration, â€œMy Favorite Holiday (on her Bandolera Records label). This award-winning filmmaker and two-time SXSW winner for best singer released the full album on November 19, creating an audience with her many music videos which can be seen on YouTube.

For the San Antonio native, Christmas meant reuniting with her parents and nine siblings (including bestselling director Robert Rodriguez.) The sculptural artist recalls, “As children, we performed” Haul Out the Holly “and other Christmas favorites with big candy canes and play for our family and friends. Another family favorite was the song” Carol of the Bells “, which I included on this album to invite the world into our family through music. My sisters have recorded in four different cities in three states. I am delighted to share their voices and this song with the world.

â€œOld Santa Claus is coming down the hill. He drove a Chevrolet, now he drives a Coupe de Villeâ€¦ A bag full of goodies, a guitar on his back. ”

As for the less optimistic realities that are also part of the seasonal package, â€œAlone On Christmas Dayâ€ – co-written by Austin guitarist-slinger David Grissom – envisions vacations among the homeless. Inspired by Vonne’s own volunteer work with the homeless, the song has what she calls a â€œTom Petty feel,â€ enhanced by Petty drummer Stephen Ferrone and David Bowie bassist Carmine Rojas.

Born Patricia Vonne Rodriguez, 50s celebrates her Hispanic heritage by adding a bilingual vocal and musical flavor to “My Favorite Holiday” with a song like “Nochebuena”. Co-authors Del Castillo and Alex Ruiz discuss the divine, the miracle of God, and salvation. â€œLas Posadasâ€ is inspired by Joseph and Mary’s nocturnal journey to Bethlehem and the classic Spanish passion game it inspired. On the track, Vonne is joined by salsa and Latin jazz giant RubÃ©n Blades and the duo give the old tale a touch of cumbia. “Cumbia Navidad” is a bubbling, multilingual celebration of Christmas in San Antonio. Vonne wrote it to perform at her beloved Holiday River Parade, which features floats carrying dozens of performers (including, in 2019, Vonne herself).

Vonne has always felt doubly blessed because her birthday falls six days before Christmas, and she wants to share that spirit with listeners. With â€œMy Favorite Holidayâ€, the native San Antonio girl brings a gift to the town of Alamo and the world.

Question: How to create a Christmas song? Where to start ?

Patricia Vonne Rodriguez: On my Christmas album I started with titles and chose themes like the Spanish song “Nochebuena” (Christmas Eve.) “My Favorite Holiday” was inspired by “You’re the Top” by Cole Porter. “Las Posadas” is a popular theme that has many interpretations and I wrote my own Ruben Blades inviting duet. (Las Posadas is a game of passion of the journey of the Nativity)

I incorporated elements from the movie â€œIt’s A Wonderful Lifeâ€ into the first track, â€œSanta’s On His Way,â€ mentioning â€œBailey Parkâ€ and â€œEvery time you hear a bell ring, an angel takes his wings. And in “Alone On Christmas Day”, I chose to write about those who have no family to return home. This song was based on an amazing community in Austin that helps alleviate homelessness and it’s called Community First Village. I volunteered there and offered David Grissom to write the song with me. I then contacted Stephen Ferrone (Tom Petty’s drummer for 20 years) and Carmine Rojas (David Bowie’s bassist) and they generously joined us for this great cause.

Question: What determined which musicians performed on which songs?

RVP: I had just met Tommy Price in my hometown of San Antonio when I actually had the last two perfect songs for him to play. He’s a legendary fierce drummer and his style and muscle matched the searing energy of “Old Man Santa” and “Santa’s On A Rampage” perfectly.

I chose Stephen Ferrone for “Alone on Christmas Day” because David Grissom and I wrote it with a Tom Petty impression. I had met Ferrone and Carmine Rojas at the Legendary China Club in New York when I was 18. So to bring them together on a special song is really a gift to the world. ‘

For â€œLas Posadas,â€ which is a nativity story celebrated throughout Latin America and beyond, RubÃ©n Blades was the perfect choice to sing with me. He surprised me by contributing to the lyrics of the solo and singing my name. I melted to the ground and cried.

Question: Is there something special that a Christmas song must have?

RVP: Spirit, and a catchy melody would be very cool to get you in the mood. Q: What are your favorite holiday songs?

I absolutely love â€œSanta Bring My Baby Backâ€ for me because of its effervescence and joy. “With my baby in the distance, what good is the mistletoe” makes me dance and sing.

I love Washington Square Park because it reminds me of those on duty who can’t be home for Christmas. It’s really a touching song because not everyone has a family to go home to and this song brings that feeling home.

I love Jerry Herman’s â€œWe Need a Little Christmasâ€ because we sang it as a family when I was little. It got us to sing “Carol of the Bells” with my sisters as a tradition, which is why I’m so glad it’s on the album for the world to share.

I also like “Washington Square Park” by Chris Isaak and “Sleigh Ride” by Ronettes.

Question: What are your inspirations in music and in life?

RVP: My parents inspire me every day. My father was a door-to-door salesperson for 39 years and my mother worked nights as a nurse to be home when we got home from school. They sacrificed everything for us.

Question: Recently, the legendary Mexican music star Vicente Fernandez passed away. Do you want to comment on this?

RVP: He was “El Rey de CanciÃ³n de Mariachi!” He was the music and voice of Mexico that will never be forgotten. He was Elvis, Sinatra, and Tony Bennett reunited. He will be sorely missed.

8 trends that defined Latin music in 2021