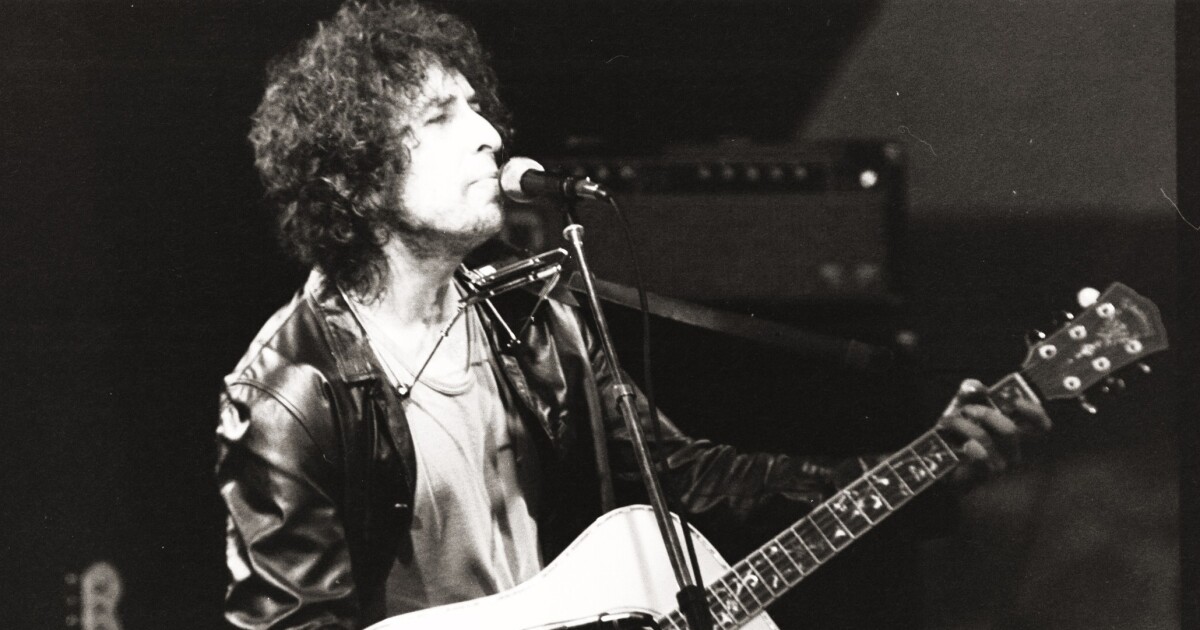 It’s a testament to Bob Dylan’s greatness that a box set of three of the albums he made near the low point of his career is as fascinating and rewarding to hear as the all new “Springtime In New York: The Bootleg” Series Vol. 16 (1980-1985). â€

The result on this 5-CD set is a gripping alternate sound story, thanks to the 54 unreleased tracks, alternate versions, studio takes and live recordings featured here. Together, they suggest how much the first three albums of Dylan’s “Lost Decade” could have been improved – and markedly different – with smarter musical choices and much more careful curation.

In their original form, both albums were fuzzy, one-off deals that promised little and delivered even less. This was perhaps their most important achievement. “Shot of Love” was so terrible that – even though the first two records in this set are from the recording sessions on this album – the only song from the original album to appear here is “Lenny Bruce”.

“Infidels” was better, even ignoring the very low bar for Dylan’s albums he was to meet at the time. Although it contained several notable songs, â€œInfidelsâ€ still sounded uneven and constrained, whether by the doubts of its star or by its seemingly colliding producers (Dylan and Dire Straits frontman Mark Knopfler). Other factors may also have come into play, although it is suspected that this was a combination of Dylan’s indecision and Knopfler being too deferential.

Now 80, Dylan is about to launch his first concert tour since 2019 on Tuesday. He was 40 when “Shot of Love” was released half his life ago. It was a time when big beats, big hair, and big pictures ruled popular music.

The advent of CDs, MTV, and sleek but aesthetically questionable new recording technologies had transformed the music industry – and Dylan’s relevance was in question, if not threatened. He was adrift and struggling to find his place.

Dylan admitted it in his admirably candid 2004 memoir, “Chronicles Volume One,” writing about the 1980s: “I felt lost, an empty and burnt wreck … a folk-rock relic, a blacksmith of yesteryear , a fictitious head of state from a place no one knows. I’m in the bottomless pit of cultural oblivion. You name him. I can’t shake him.

His creative and existential unease was all too clear throughout â€œShot of Love,â€ the third and final album Dylan released during his two-year Christian spell. “Empire Burlesque” and less important songs on “Infidels” such as “Neighborhood Bully” only fueled growing fears of his artistic demise.

These reports turned out to be wrong, thankfully, even though his subsequent albums in the 1980s – “Knocked Out Loaded”, “Down in the Groove”, “Dylan & The Dead” “and” Oh Mercy “- seemed almost deliberately designed to damaging his legacy in a big way.

It wasn’t until Dylan’s masterful 1997 album “Time Out of Mind” that he finally painted another musical masterpiece, let alone one worthy of the legendary status he had. won in the 1960s and continued with such notable albums as 1975’s “Blood. on the Tracks” and 1976’s “Desire”.

How, then, does a box set devoted to the first half of its lost decade without direction produce such appealing results as “Spring in New York?”

One of the keys to the dramatic improvement in music on this complete set is the welcome elimination of the smooth, glossy output – including audio compression, cluttered instrumental overdubs, and cheesy electronic drum sounds – that made so much of Dylan’s music in the 1980s sound instantly dated.

The inclusion in “Springtime” of several alternate versions of songs – including “Don’t Fall Apart on Me Tonight”, “Too Late” and “When the Night Comes Falling from the Sky” – which are easily superior to the original versions is just as crucial. heard four decades ago.

In addition, there are a multitude of songs here that were mysteriously omitted at the time of the release of “Shot of Love”, “Infidels” and “Empire Burlesque”. This is nothing new for Dylan, whose penchant for major last-minute revisions and complete overhauls of recordings dates back at least to “Blood on the Tracks” in the mid-1970s.

Even so, it remains quite baffling why Dylan has chosen to remember – so far – so many great songs. Key examples include “Dark Eye”, the delta blues-infused “Fur Slippers” (memorably revived by BB King in 1999) and the 11-minute collaboration with Sam Shepard “New Danville Girl” (which emerged under a decidedly inferior form on Dylan’s lamentable 1986 album, “Knocked Out Loaded”).

But there is nothing new in his penchant for recording – and then excluding – epic songs that would have elevated the albums from which they were cut. Witness the spellbinding “Blind Willie McTell”, which was inexplicably cut from the 1983 “Infidels” and was only released on “The Bootleg Series Volumes 1-3 (Rare & Unreleased) 1961-1991”. (It was also the first CD box set ever released by an artist in any musical genre.)

The previously retained 1983 version of “Blind Willie McTell was an acoustic duet of Knopfler on acoustic guitar and Dylan on piano, vocals and harmonica. The” new “version on” Springtime in New York “adds the other three key musicians of “Infidels” – Dire Straits keyboardist Alan Clarke and the Jamaican rhythm section ace of bassist Robbie Shakespeare and drummer Sly Dunbar.

The intimacy of the previous duo version is lost in the transition to fully electric rendering. But Dylan’s hushed voice on the duet version is replaced here with some of the most passionate vocals of his career, including a verse that finds him playfully simulating the phrasing of Bob Marley, with whom Dunbar and Shakespeare have also recorded.

At almost every turn, â€œSpringtime in New Yorkâ€ offers musical gems that had been thrown aside by Dylan, including â€œSomeone’s Got a Hold On My Heartâ€ and â€œFoot of Prideâ€. Even minor songs are obvious, like the contagious rock’n’roll “Julius and Ethel” (an ode to Julius and Ethel Rosenberg, the New York couple who were executed in 1953 after being convicted of plotting to pass on secrets. atomic weapons to the Soviet Union.)

Much of the first record in this set is devoted to pristine recordings of Dylan’s rehearsals with his reborn Christian-era band. It featured guitarist Fred Tackett, former James Brown bassist Tim Drummond and future Traveling Wilburys drummer Jim Keltner.

They were complemented by a sizzling vocal trio that included gospel dynamo Carolyn Dennis. She was quietly married to Dylan from 1986 to 1992 and is the mother of his 35-year-old daughter, Desiree Gabrielle Dennis-Dylan.

The rehearsal recordings consist largely of non-Dylan songs. These range from the witty “Jesus Met the Woman at the Well” to unexpected covers of Dion’s “Abraham, Martin and John”, Neil Diamond’s “Sweet Caroline” and Dave Mason’s staple soft-rock, ” We Just Disagree “.

Diamond and Mason’s covers might be a lark to Dylan, but he seems genuinely invested in them. And when he and singer Clydie King embark on a catchy rendition of the 1959 Jimmy Reed blues standard “Baby What You Want Me to Do”, you can almost feel the sparks fly.

Dig even deeper on the other records of “Springtime in New York” and you will find more surprises.

One of them is a version of Frank Sinatra’s chestnut “This Was My Love” which predates the three Sinatra tribute albums Dylan released between 2015 and 2017 by decades. Another is his take on “I Wish” by The Temptations. It would rain, â€which is more Dylan-esque than Motown.

What impresses the most is the musical chemistry in which Dylan engages on his own songs. “When The Night Comes Falling From The Sky” was the nadir of “Empire Burlesque”. The version on “Springtime in New York” replaces the aural pomp with a raw and welcome immediacy.

It may be a coincidence, or a stroke of fate, that the recent release of this 5-CD set came just six months before the 60th anniversary of Dylan’s eponymous debut album in 1962. But who better for offer a new perspective to his music – especially some of his most criticized music – than Dylan himself?