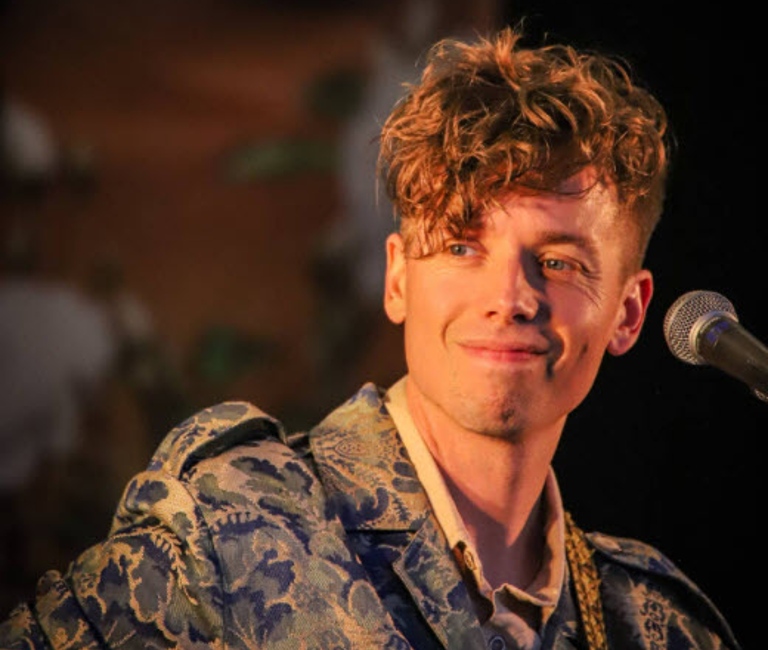 Your songs have such a beautiful essence. They are incredibly endearing and almost begging the listener to see, feel, and hear the goodness of life and love. How do you hope people feel when they hear your music?

I write about love but also about desire – and sometimes love and desire coexist (and it’s the same with light and dark). It’s about hopes and fears and everything in life. If they feel recognized, my dream has come true, basically.

“Where Oceans Meet” was created all over the world and then you ended up being at home for a long time because of the pandemic. How did these two opposites affect the album – its overall sound and lyrics?

I have been traveling and touring since I was 18 and don’t think I have slept in my own bed for more than 2-3 weeks in a row since this trip started. So the fact that I have been sleeping and spending time in my own home and in the same environment for over a year has definitely affected the whole creative process around “Where Oceans Meet”.

You can tell it was super focused with a common thread throughout the album. I didn’t tour and record at the same time like I did on a lot of my other songs before this album, so I had time to really dive deep into the process and hope people can read it. ‘hear.

â€œWhere Oceans Meetâ€ is available on Spotify by clicking here.

Tell us about the creation of ‘Lightning’: did it start as a hymn about universal love or has its message evolved over time and influenced the concept of video ? Or was the video concept thought of as a complement to the song’s lyrics?

When I wrote “Lightning” I wanted to write a song about gratitude – those magical moments in life when you fall in love … the first time I looked my little girl in the eye, the moment I’m on. stage and audience and my music collides and you feel that energy at the same time with a lot of other peopleâ€¦ I wanted to write about those moments.

Being lightning strike in that sense was a lovely picture (for me, at least) and when I made the video I decided with the director that we should basically be paying homage to all kinds of love.

I think it’s important to talk about inclusion, it’s important to talk about the importance of diversity and we all have to fight these old ideas about what love is because I have a lot of friends. , I have a close family that does not fit in the Heteronormative boxes that we have been kind of told is the only way love could be for many years all over the world, and it doesn’t is just not true.

Love is beautiful regardless of everything. If two people love each other, I think it’s a beautiful thing no matter what.

The video for “Lightnin” stars actor Alex HÃ¸gh Andersen (“The Vikings”) and can be seen below.

â€œMonsters in My Mindâ€ has nearly three million Spotify streams. What do you attribute this success to?

I think “Monster in My Mind” is a song that people can relate to because anxiety and mental health are huge issues for a lot of us. I feel like the world is stressed out and a lot of people feel like they can’t keep up. I don’t think ‘sex, drugs and rock and roll‘ are the biggest issues with our kids today, it’s mental health issues.

This is the biggest challenge for the younger generations and even the older ones too. I guess there are a lot of people like me who have had to find a way through life, through anxiety. I’m so glad people took this song to their hearts and we can share it together.

â€œHanging With Youâ€ is another fan favorite, with 1.2 million streams. It’s such a catchy song. What can you tell me?

“Hanging With You” is one of my favorites. I wrote the song in LA before it all closed and this song just had to be on the album.

For me, it’s full of summer memories, it’s full of memories of me hanging out with my friends in the sun in California. And then when it all stopped immediately, it took on a whole new meaning to me because these were things that we took for granted before and all of a sudden we couldn’t do any more.

Hope people can feel the feeling of appreciation that I was trying to convey, the appreciation for those times when we can see each other, party and hug a stranger and go to festivals and concerts and all kinds. things we used to do and are slowly becoming able to do again.

You have such a strong bond with your fans. They love you and you also show them genuine affection! What do you attribute this to?

I think I have such a strong bond with my fan base because I’m basically like them. I’m not trying to come across as some kind of superhuman. I feel like trying to be open about the things in life that I find really difficult means that people can relate to them.

It took me a long time to build a platform where I can actually make a living from music, and so I really like my fans, I really like people showing up to my concerts and playing my music. music. I hope they can feel that I am not taking them for granted at all. I feel very grateful every day.

Are there certain types of songs that seem more attracted to your fans than others (ballads versus upbeat songs, love songs versus philosophical songs)?

I think different types of songs occupy different places in people’s lives. I think the songs that attract people the most are the ballads, the more thoughtful songs. But I also feel like these ballads have to coexist with the happiest songs because it’s like life – there is both light and dark. So people can dance, cry and laugh at the same time at my concerts.

Does this affect your line-up or song selection for the albums? Or do you follow your creative instincts?

When I’m in my creative space, I only really think about that moment, so I never have the end result in mind when writing a song. I am just the flow.

If there was just one thing you want American music fans to know about you, what would it be?

The United States means a lot to me. I’ve spent at least three or four months a year in the United States since I was 19, so it’s like a second home. I always feel a connection with people when I go there. I just hope I can meet a lot of you next year when I come back for the promotion and the tour.