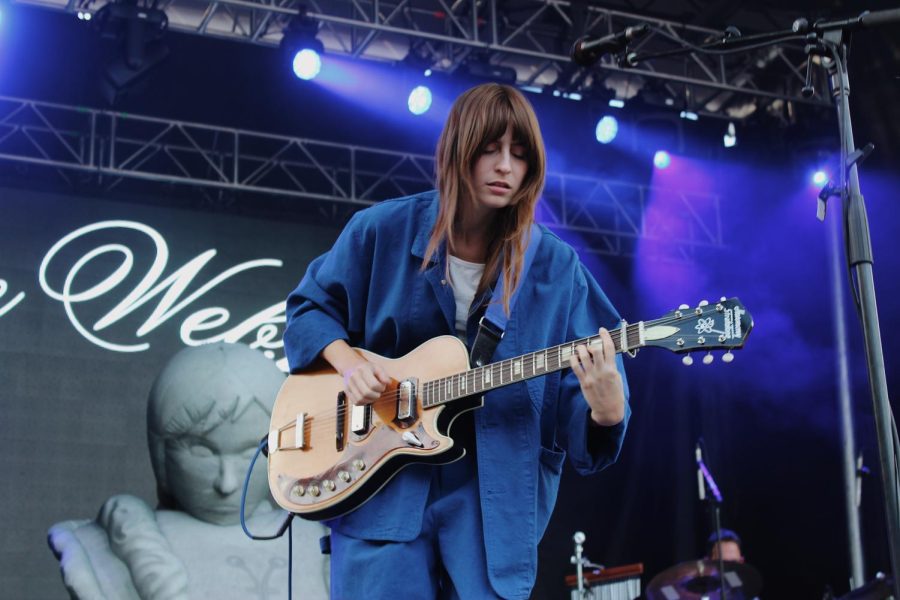 On Saturday, August 13, traveling music festival “Here and There” hit the Mass MoCA in the Berkshires for a day of musical celebration. The festival, organized by musician Courtney Barnett, brought together a handful of this generation’s most popular independent artists who performed in the quaint old industrial town of North Adams.

The festival is booked at 15 locations across the United States with rotating artists as well as various social justice organizations to which a portion of the proceeds from the concert are donated. The seven acts of the Mass MoCA lineup drew an artistic and stylish crowd of all ages. The lush green hillside adjacent to the museum was dotted with lawn chairs and colorful blankets before a singular scene, overlooking the towering mountains behind it.

Such an idyllic setting seemed perfectly suited to the event. One artist in particular, freelance artist Faye Webster, enhanced the natural vibe with her cool energy.

At around 6:10 p.m., the 25-year-old Georgia musician took the stage in an oversized blue outfit accompanied by her band of four and an inflatable stone head statue with glowing eyes. Greeted by enthusiastic cheers from the crowd, the excitement was palpable as Webster kicked off the hour-long set with “Better Distractions”, the opening track from his latest album titled “I Know I’m Funny haha”..”

Although plagued with some technical issues early in the set, Webster didn’t let the incident overshadow the performance. Keeping their composure, the band riffed as Webster briefly left the stage to situate the sound.

As Webster’s discography takes on a more relaxed and laid-back tempo, the band was more cohesive than ever. Electric guitar, soft percussion, bass, keyboards and pedal steel guitar blend together in a smooth combination of jazz, country and alternative genres. This unusual style paired with Webster’s nasal voice is what makes his music so nuanced and fresh.

His vocals collided effortlessly with the instrumentals, creating a balanced live sound that reflected the ease of his records. Such charm translated into fan-favorite, “Right Side of My Neck,” with the simplistic yet versatile expression she and her band perform with. The song exuded a dignified freshness as each instrument had a purpose for being on stage. Individually holding a diverse style, the instrumentals come together cohesively for this slow jam.

What I loved about his performance was how Webster and his band demonstrated distinction in subtle ways, staying true to his own personal method. However, the band lacked horns, a key feature of some Webster songs. I think it’s essential that she adds a saxophonist to her live set, to provide the necessary warmth. It was a missed opportunity to draw audiences deeper into its moving blur.

Webster performed all of his hits, including “I Know I’m Funny haha” which continued into “Jonny”, a sweet love track with spoken-word narration. With a slower tempo than usual, Webster vocally played along with the overall melody of the track. This impromptu flow of cadence, in conjunction with the oral narration of his fantasies with this Jonny character, radiated storytelling in its true form.

Webster’s choice to color outside the lines of the original track proves his desire to produce an engaging show in his own minimalistic way. His band also left room for a small jam session that grew in volume and intensity, infusing more drama into the song. These little details all helped diversify the live version of the original while playing up the theatrics of the story.

Pokémon’s instrumental song, “Lake Verity”, was explained by Webster to be a beautiful song that she sometimes listens to while taking a walk. She and her band performed the track in all its trap-beat, dreamlike glory. The song itself is nice, but has been cut off jerkily in the context of the music. While it might have seemed like an outlandish idea, the decision to play it didn’t have much overall relevance and stuck out like a sore thumb compared to the rest of his performance.

Webster amped it up near the end of their set with “Cheers,” letting the band have their moment to shine in traditional rock style. An edgy synthesizer and fun electric guitar accents pumped up the energy, bringing the crowd to a more solid and heavier tone. This choice towards the end of the set was exciting. It gave the impression that even though Webster’s music is rather soft, she and her band not only have the ability to rock, but can do it with conviction.

After introducing his band members, one of whom being his own brother on bass, Webster finished with “Kingston”. The rendition was fun and lighthearted as she let her audience fill in the gaps in a sentence. The eclectic instruments and playful inflections elevated the vocals, notably through the verve of the percussion. Her voice repeating the words “Baby, tell me where you want to go”, sounded like a dream in itself. Such closure was magical.

Webster really stood out with her “Here and There Festival” set. Musicality comes naturally to her, and it shows as soon as she steps on stage. Combining different genres, various stylistic instruments, and blending singing and speaking, Webster delivered a solid performance that exudes a freshness of what music can be. His unique point of view proved that music is capable of containing its own contrasts within itself, blurring the lines of storytelling and sound in just one hour.

Caitlin Reardon can be reached at [email protected] and followed on Twitter @caitlinjreardon.

Qatar calendar lists things to do in September: music, culture and art