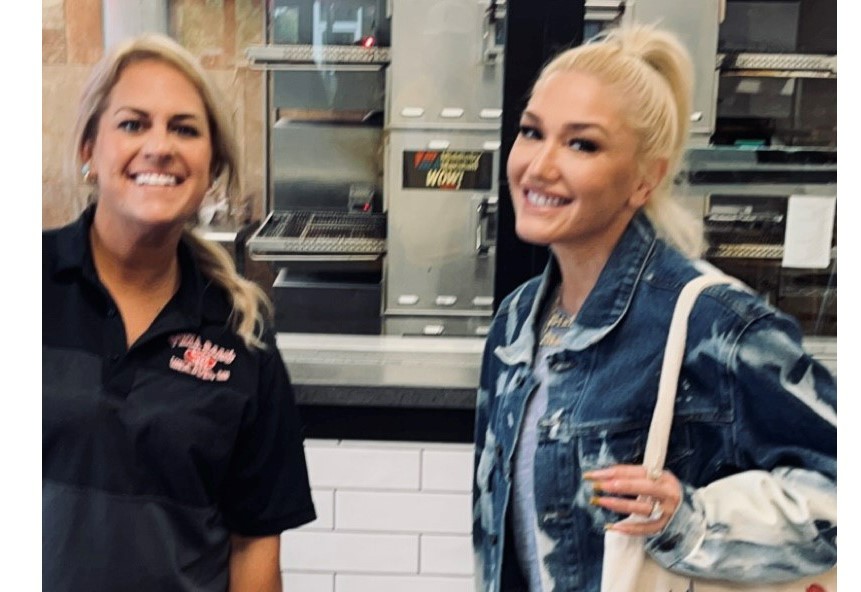 Pizza Sam’s in Downtown Midland received a very special guest on Saturday when Gwen Stefani stopped in for a drink and a bite to eat.

The famous singer, songwriter and judge of “The Voice” was in town because her husband, Blake Shelton, was performing the same day at the Soaring Eagle Casino & Resort in Mount Pleasant.

As Stefani walked into the pizzeria with her son, Pizza Sam’s Ashley Brandt wasn’t sure if she was the real Stefani or just a lookalike.

“She was normal,” Brandt said. “She had no security or anyone with her.”

Brandt waited at Stefani’s table, where she ordered drinks and a small cheese pizza for her son. It wasn’t until Brandt saw Stefani’s necklace — which read “Stefani” and “Shelton” — that his suspicions were confirmed.

Brandt described Stefani as friendly and sweet, taking pictures with the staff and the few customers who were in the restaurant at the time.

“It’s exciting. It doesn’t happen here,” Brandt said. “It’s a cool experience to have this memory that I’ll never forget.”

Later that day, Stefani also stopped by the Midland Mall. At around 5:30 p.m., Lauryn Grace of Midland was walking through the mall when she saw Stefani exiting the Fantastic Finds antique store with two children.

“I had to do a double take a couple of times,” Grace said. “I didn’t expect a famous person at the mall.”

Grace knows Stefani’s music, including the hit “Hollaback Girl.” She approached Stefani, chatted with her for a few minutes and asked to take a picture with her.

“She was friendly, like a normal, down-to-earth person,” Grace said.

Have you also met Gwen Stefani? Do you have a photo with her that you would like to share with the Daily News? Email [email protected]

Niki: review of Nicole – introspective indie from an artist in search of her sound | pop and rock