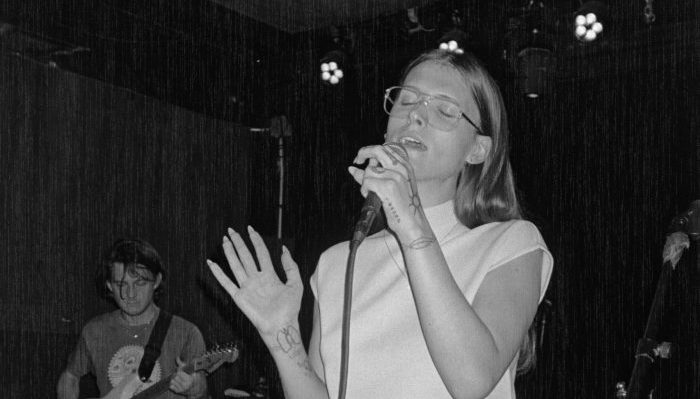 Ethel Cain is open to the fact that she wants listeners to stop dead. With her music, the goal is for listeners to fully absorb the moment and the sounds she creates. Growing up in a Christian town in the south of Florida, Cain was raised largely on choral and cult music, with a touch of country mixed in. This is something that is close to her heart, even if she no longer attributes these ideologies. Once the 23-year-old songwriter, producer and director discovered the the Internet and pop music, his whole world opened up. Since then, she has been on a path of artistic exploration.

As an artist, it is difficult to categorize Cain. His music winds between dark and ambient textures that deliver a delicate and evocative sound to fully realized pop music that feels like the darker version of Lana del rey, coupled to a DIY and based perspective. Cain also records and produces her music entirely herself, giving her the freedom to explore any sound she wants and create without the rules and parameters of modern production. On any given track, her vocals are rich in personality and dynamics, whether through theatrical vocal performances or heavily processed Auto-Tuned lines.

In addition to recording her music herself, she is also the director of her music videos and visuals, which creates a distinct aesthetic behind her project. In collaboration with her best friend and videographer Edith Underground, both won gold with the music video for the single “the land of god,â€Which captures a journey of Florida To Los Angeles with striking visuals entirely shot with VHS cameras for a raw and intimate feel.

The video highlights the essence of being on the road and away from home for the first time, as well as the anxiety and excitement of being alone. The song and video also feature Gothiclique member Wicca Phase Springs Eternal, who delivers his signature brand of dark voices and introspective lyrics.

His single “To crushIs without a doubt his most accessible and immediate to date. With a simple bassline as the basis, the track is what Cain describes as a “stupid pop song.” However, he’is impeccably written, with playful, observational lyrics that paint a clear picture of what she is trying to describe exactly. It helps that the choir radiates infectious energy. While she was initially hesitant to release a simple pop song of this nature, fearing that people would associate it solely with that sound, she grew up embracing the track. It has now become his breakout single of sorts.

The accompanying video is equally playful, with Cain driving in a van through his southern town with a boom box in tow, a bundle of Marlboro Reds, and curlers left on his head. â€œCrushâ€ is the summer wellness hit you’ll want on your playlist no matter the season. While this may be a departure from his darker material, it shows his breadth as an artist.

We sat down with Cain to discuss his musical roots in the south, his unique visual aesthetic, his musical freedom and more.

What music was important to you growing up during your years of learning about songwriting and performance?

I didn’t have access to a lot of music growing up. My parents were very conservative Christians. I was in a choir with my mom, so a lot of it was choral music, holiday albums, and Christian music from the late 90s. My dad also played. Creed, Nickelback and Lynyrd skynyrd in the truck. That was pretty much it until I was in high school when the internet hit, and I discovered pop music. For most of what I would call my formative years, it was just church music and country music, which I think is the intersection in which I still find myself today.

The visual aesthetics of your videos are so original, intimate and raw, especially with your video for â€œGod’s Countryâ€. What is your creative process behind creating these compelling visuals for your music?

The Covid-19 pandemic hit. I was leaving Florida and there was a lot going on, so I was very head over heels at the time. My best friend who shot the video, Edith Underground Joined me on a road trip to LA, and it has all the old fashioned analog VHS gear. I knew I wanted to take her expertise in what she does and mix it with that feeling of being on the road, free-spirited, and wide open. I was leaving the house for the first time and felt like I was leaving things behind, the training wheels coming off. It was just a very scary moment when the world opened up before me, and I was both terrified and excited, but I wanted to capture this in a raw and personal way.

There was no real rhyme or reason for it. We just pieced together this story of life during the pandemic, life in the great countryside, and it was just very liberating and adventurous. It was the theme of the whole EP, this leap in the unknown idea. It was fun to let go of the reins and see what could happen, and I love it.

One of the first things that stood out to me about your music was the unique vocal production choices you use. On multiple songs, your voice goes through a series of different effects, delays, reverbs, and treatments. What can you tell me about your production process that creates this distinct sound?

I love this question because I’ve never asked it before, but I still want to talk about it. [Laughs.] I mixed this EP myself because I like to push myself to do things on my own and learn new things. This was my first project using Ableton software, and I was just downloading VSTs and getting the hell out of it. I like the choir, the vocals that sound pretty good, but I also like pop music, so I would add Auto-Tune. I had never used Auto-Tune before so it was fun to play with for the first time. I love adding chorus effects, panning vocals, and doing weird things with the delay. Guess I’ve always imposed myself by the one rule of having no rules and just experimenting.

For each song, I just sat down and individually designed them to match that sound space. I used to produce my music after I smoked too much weed, and I would sit there with my eyes closed and the headphones on and I felt like I was in this bubble, so I wanted the audio feels like a hub, almost like you’re in it.

What was it like to collaborate with little aaron and Wicca Phase Springs Eternal, and do you have any dreamy collaborations in mind for the future?

I met them by chance. Wicca found me thanks to my friend Nicole dollanganger and reached out and was really nice. From there, lil aaron found me, and it was really a drop in a new world with that scene. The collaborations with the two were almost like a thank you for everything they have done for me and a tribute to them. They are really talented people, and there are elements of them that I took for my own music, so it was nice to learn new things.

When it comes to dream collaborations, I like Florence + the Machine. She has been my biggest inspiration since I was in college. I always wanted to choose his brain and work on something musically and visually. I think she’s just a force to be reckoned with. I also spoke with my friend Kris [Esfandiari], which acts like woman king. We exchanged ideas on each other, and she was a huge inspiration for my music.

Along with your song “Crush”, it sounds like your most accessible song yet and your single in some ways. What was the process of writing this song?

It was very strange. The EP took on a very ambient, dark and brooding turn. i lived in Indiana in a church. It was in the middle of winter. I had cabin fever, and everything was getting dark. One night I just made the bassline, I’m kidding, and decided to do something fun just for myself. I wrote it in 20 minutes, and sent it to my A&R at my publishing house, and she told me I had to publish it.

When â€œCrushâ€ played like he did, I was like, â€œWhat the hell is this? Looking back, I guess I should have expected that because it’s such a dumb pop song. [Laughs.] I came to like it, but I was afraid to be seen like this because it was a unique piece and not my main thing. It’s silly, and it’s cute, so I’m glad I released it.

How would you describe your music to someone who has never heard an Ethel Cain song before?

Funny: I’ve been trying to think about it lately. I think there is a difference between what I want my music to be and what my music ends up being. I always end up going on a tangent, and my original plan is derailed by any wacky plan I get right now. I would say my music is like dream pop, but I also want it to sound like cult music. I want my music to be a long story. I love music that stops you in your tracks and makes you think about the moment you are living. I want each of my songs to be that bittersweet moment in time, where it’s just a passing moment, but it’s beautiful and right now.

Your popularity as an artist grew exponentially while the world was still at a standstill. Now that you’re finally playing gigs, how did you feel and what other plans do they have in store for you next year?

I get super nervous while playing. It scares me. I’ve only played about five shows so far, but I’ve been very lucky to have adorable and attentive fans. It was like a personal relationship with my fans. I interact with them on Instagram, Discord, Twitter, and I really became friends with them. As for the plans, more than the performance, I am happy to do more projects. i really want to get into movie and I want to be a director and screenwriter more than a musician. i want to make a video game and create the score for that and really whatever comes to mind. I’m excited to act and shoot, but I think my real performance is in the studio, behind the computer, in a dark room doing stuff with my hands.

Latin Grammy Live Updates: First Prizes Given Before The Show