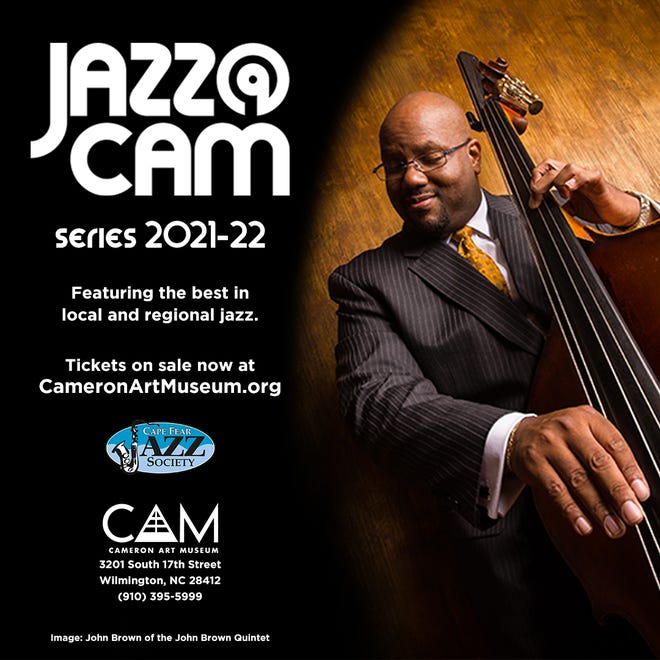 “If you have to ask what jazz is, you’ll never know.” – Louis Armstrong

But if you want to know what jazz is, you can find out when the Cameron Art Museum in partnership with Cape Fear Jazz Society returns for its 11th year of Jazz @ CAM.

The Jazz @ CAM series will feature the best of local and regional jazz on the first Thursday evening of each month from October through April 2022. The series will begin October 7 with Bajissima Latin Jazz and continue with Darryl “Soul Sax “Murrill, November 4; Benny Hill Unplugged, December 2. In 2022, the series will star Brian Miller Quartet on January 6; John Brown Quintet, date TBD .; Ti Harmon and THRIO with Andrew Berinson, March 3; and ends with the El Jaye Johnson Band on April 7.

To purchase tickets or for more information, visit https://cameronartmuseum.org/.

Bajissima Latin Jazz is the latest project from bassist Natalie Boeyink. Featuring a musical talent cultivated in North Carolina, Bajissma’s sound is brought to life by the catchy and infectious beats of Latin America and the Caribbean. Trombonist Joe Dowdy, retired member of the US Navy Band, will join Boeyink in the quintet; Lynn Grissett, masterful improviser; Carlos Garcia, pianist; and Jon Hill, a drummer.

Darryl Murrill started playing the saxophone at the age of 13. He is proficient in alto, soprano and tenor saxophones. Murrill shared the stage with greats like Tom Brown and Marcus Anderson. Murrill’s roots are musically inspired and started in the church. The uniqueness of its musicality is attributed to this early exposure to hymns, negro spirituals and gospel music.

Over the past twenty years, Benny Hill has performed in a diverse set of musical groups and engagements, ranging from orchestral pits and cruise ships to artist and featured soloist in many venues. across the country and abroad.

Hill is familiar with the many styles and genres of popular and classical music and specializes in jazz. It is steeped in the tradition of many big names from the past, including Julian ‘Cannonball’ Adderley, Jackie McLean, Dexter Gordon, John Coltrane and Charlie Parker.

Brian Miller, originally from Kinston, was first exposed to music in his church and developed a strong passion for music from an early age. By the time he graduated from high school, he was playing saxophone, tuba, trumpet, snare, bass clarinet, and piston trombone. While studying at North Carolina Central University, he worked with jazz artists such as Clark Terry, Lonnie Smith, Terrence Slide Hampton, Maceo Parker, Grady Tate and Nicholas Payton. He has performed at the Montreux and Vienne Jazz Festivals. Brian has performed twice with the NCCU Jazz Ensemble at the White House for Bill Clinton.

Brown was nominated for a Grammy for her performance and co-writing on Nnenna Freelon’s 1995 Concord release, “Shaking Free”.

Also gifted in classical music, Brown has performed as a substitute with the North Carolina Symphony since 1992 and has performed with the Opera Company of North Carolina and the Carolina Ballet. John is a YAMAHA Â© Artist and has extensive performance experience including feature films, television, film, theater and recordings.

Ti Harmon, originally from Philadelphia, is a jazz singer, songwriter and conductor. She started singing at the age of five and began working as a singer in Madrid, Spain, after graduating from New York University.

After moving to Paris, the Ti Harmon Project made its debut at the Frontenay Jazz Festival in Frontenay, France. In 2010, she recorded her first album titled “Somewhere Between”, with special guest Kirk Lightsey.

In 2011, the Ti Harmon Project won the “Public Priz” at the Crest Jazz Festival in Crest, France. In 2012, Ti recorded his second album, â€œStory to Tellâ€, with an independent French label, including original compositions.

Ti has toured Asia and Europe as a leader and featured artist. She recently completed her Masters in Jazz Studies in Composition and Arrangement at North Carolina Central University in Durham, North Carolina.

Leonard “El Jaye” Johnson is an extraordinary talent and has earned the title of “one-man band”.

He is a conductor and has managed to bring together some of the best musicians in the world to include them in his many productions, including The Port City All-Stars.

Johnson is the founder and owner of EDJE Records, an independent record label, which is a subsidiary of his Wilmington, NC based company El Jaye Enterprises. Johnson has worked as a songwriter, arranger, producer, engineer, promoter and educator. Highlights of his career include opening act for smooth jazz supergroup Fourplay at BTI Meymandi Concert Hall in Raleigh, NC, and one of the legendary Temptations Review opening acts starring Dennis Edwards. Johnson also opened for Rock and Roll Hall of Fame inductees The Lovin ‘Spoonful and classic R&B group The Manhattans.