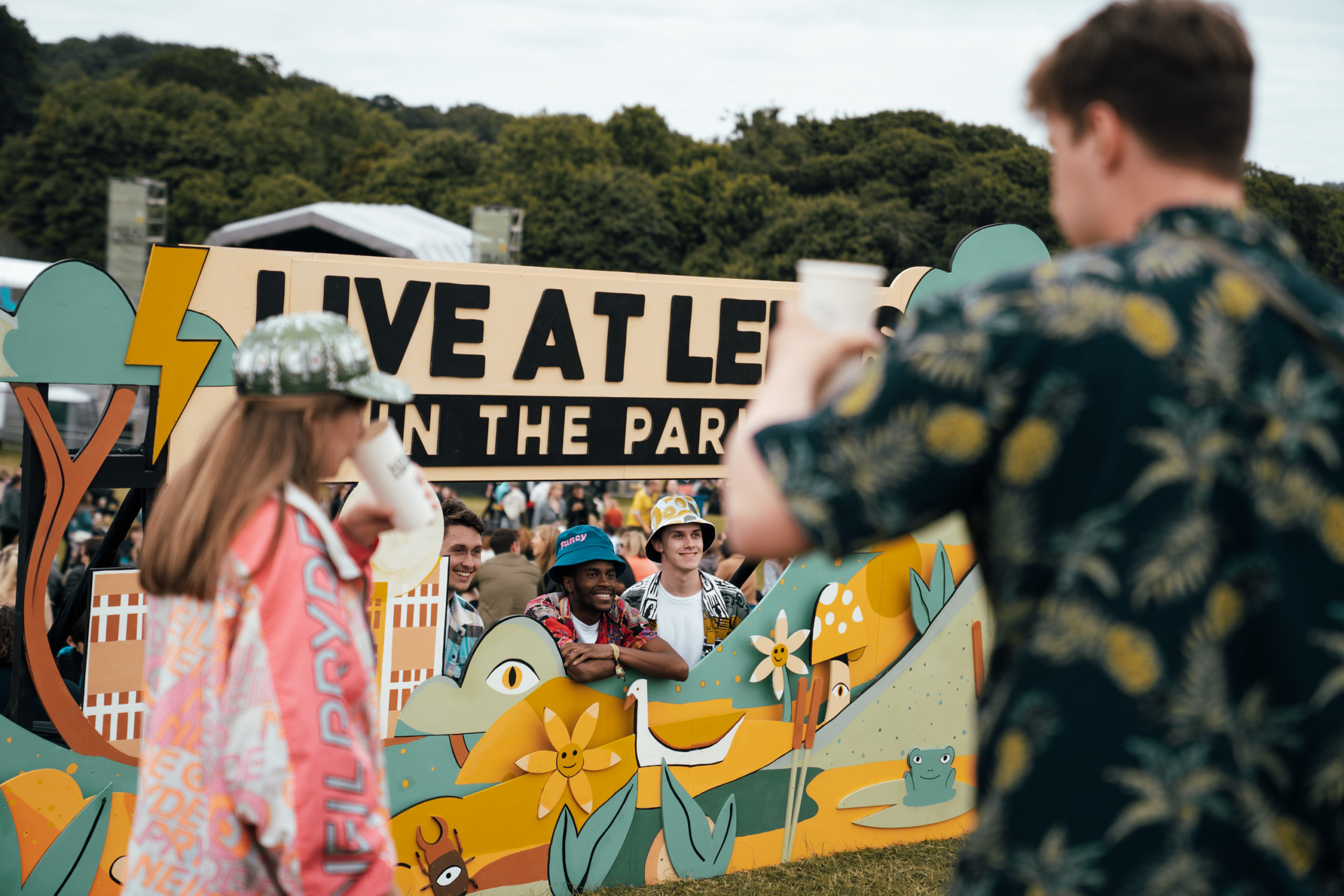 The very first Living in Leeds: in the park can be considered nothing but a success! Despite the cloudy weather, spirits were high and nothing could dampen them! Music lovers can’t wait to see the festival season finally in full swing.

As a one day festival it was clear that the attendees were there because of their love for the artists and bands playing, thanks to the organizers for a stunning line up!

Despite the train strikes, I have to say that getting to Temple Newsam was surprisingly easy and surprisingly hassle-free – highly recommend the shuttles. The organization of this festival was one of the best I have ever had and for that reason it made the day much more enjoyable with little to worry about other than enjoying the live music.

Upon arriving at the festival, I started my day by going to by Lauran Hibberd on the main stage of MTV. This main stage was somewhat underwhelming and seemed a bit small for a main stage, but the acts still brought all their energy which showed through the crowd. Lauran, as I mentioned when I saw her support Nuts, was full of energy and had a great stage presence, dancing around the stage and interacting with her band. With the release of their debut album in August, this set will no doubt have fans keeping their eyes peeled. She gifted the festival with new tracks, including “I’m Insecure”, which she continued by explaining that it was about her irritable bowl syndrome (IBS) and saying “sorry. Boys, girls poop too!” I love those comments and I remember her saying “girls sweat too” in Manchester. I just like honesty. Other songs included “How am I still alive which she dedicated to the Queen this Platinum Jubilee weekend.

Will pass Cassie in the DIY Big Top scene, this scene immediately felt more atmospheric than the main scene, perhaps because it was in a tent. Cassia was playing their typical groovy but quite sweet tunes. not necessarily a criticism but there was a noticeable drastic drop in energy compared to Lauran. However, it was still early in the day and the crowd was buzzing.

The day went on and it was time to refuel with a pint, an overpriced pint. I’m not sure I want to check my bank account because a whole seven pounds for a pint isn’t student friendly, but we’re moving…While this daytime robbery was happening, Dylan John Thomas sounded great as we walked past the Hill Top stage back down to the main stage. Obviously, the steps were quite close to each other. This can be seen as both a positive and a negative, as it was easy to wonder, but it also meant that the music clashed and could be heard at other stages. This was especially noticeable on the Hill Top and Big Top stage where it looked like they were fighting over who was louder.

Alfie Templeman had little stage presence, but with her hardcore fan base, that didn’t seem to affect her popularity. Woman of your dreams under the marquee were a stark contrast, completely electric. With an unreal stage presence, singer Rakel Mjöll dominated the stage with her voice, movements and forms. Introducing their song “Somebody”, Rakel said the song was “dedicated to all the bad female dogs”, saying that anyone can identify as a bad female dog regardless of gender – “gender is a construct and let’s tear it up together”. Other song lyrics included “just have a little f**king empathy” – that seems incredibly relevant in our society right now. All in all, a spellbinding set, and the hardcore fans, who were front and center, will have had their year.

holly humberston started his set by introducing himself and asking, “What’s up Leeds!!?”. I love the way she presented herself – I think, even more at a festival, it’s important, but she clearly had a big fanbase (and crowd), who all knew who she was . Throughout her set, she chattered between songs, awkward chatter she recognized, but it made her all the more authentic and down-to-earth. The comment “I’ll just play you some of my songs if it’s cool” stuck with me because it really shows how nice she is. It also made us laugh because clearly this whole crowd would like to hear his songs. Standout songs included “Deep End”, “London Is Lonely”, “Sleep Tight”, and “Falling Asleep At The Wheel”. She had a wonderful voice and I think everyone in Leeds was in awe of her.

Sport Team, as expected, stole the show. Alex Rice led the show, and jumping over the speakers he gave a performance that won’t be soon forgotten. Clearly in good spirits after the platy jubs, he chatted with the crowd as he acknowledged it was their first festival back, “enjoy this evening” and “apologies for the singing – bank holiday weekend” with a chuckle. The 45-minute set included old tracks from sports teams as well as their latest two singles “R Entertainment”, “The Game” and the previously unreleased title track from their upcoming album “GULP”. Alex introduced this as “we think it’s pretty solid” – I agree, drop the album.

In the Dork tent, Leeds bands The Goal were electric. Kicking off their set with ‘Get Close’ and ‘Same Thing’ from their recent EP We’re not going out but tonight we might their music got a great response and reaction from the crowd with everyone dancing. They also gave us a new song, which resulted in a little mosh pit on the right side of the tent – clearly the crowd loved it! I love L’Objective’s music a lot (as I said in my episode of Up and Coming on Sez Says) and I highly recommend you give it a listen if you haven’t already!

The sequel was Nuts. Kicking off their set with the killer song ‘Burn the Empire’, it seemed incredibly fitting to sing ‘Burn the Empire’ as the country had just celebrated a corrupt and unjust institution, with Prime Minister Boris Johnson facing a fair vote of no confidence. a few days after the festival. Like Sports Team, they played songs from their previous album (WL) while we wait for the release of the new album – I already discussed it with the Snuts here! ‘Zuckerpunch’ received a great response from the crowd, with phones flying through the air recording it – but that’s almost what the song doesn’t… – review of the track here. Jack Cochrane went on to say “the first half is us acting like badass”, but then showed his softer side with the track “Somebody Loves” and ended his set with the fan favorite song. “Glasgow”.

Where to start easy life Position! Crazy scenes. Huge crowd and everyone was so engaged. Not only did the band sound fabulous, good energy, great stage presence, but the production also engaged with a well-thought-out backdrop, drums to match, and the lighting to match the mood and mood. vibe of each song. Immediately creating a feud with The Pigeon Detectives (who were on Hill’s upper stage), Murray Matravers joked “Good to have come, we’re bumping into something Pigeon and their shitty indie music“. album ‘dreams’ Life is a beach was out of competition. During their set, Murray admitted “I’m too drunk, I forgot the f**king lyrics” but the crowd had their backs and he redeemed himself with the chat between songs. An example of this being “we seem to be experiencing technical difficulties…the mosh pit is non-existent”. Towards the end of their set, Easy Life had a collection of around 7 or 8 bras on stage, and ending with their most-listened to song ‘nightmares, and the comment of “never go to pigeon detectives “, Easy Life received massive applause and for an extended period of time – the longest of the day (that I have seen).

Headliners Bombay Bike Club had as large a crowd as possible given the size of the stage, but many festival-goers sat watching from the hill.

I really recommend Live at Leeds: In the Park, and I hope the “In the City” version will do the same!

You can get tickets to Live at Leeds: In the City on October 15 here!