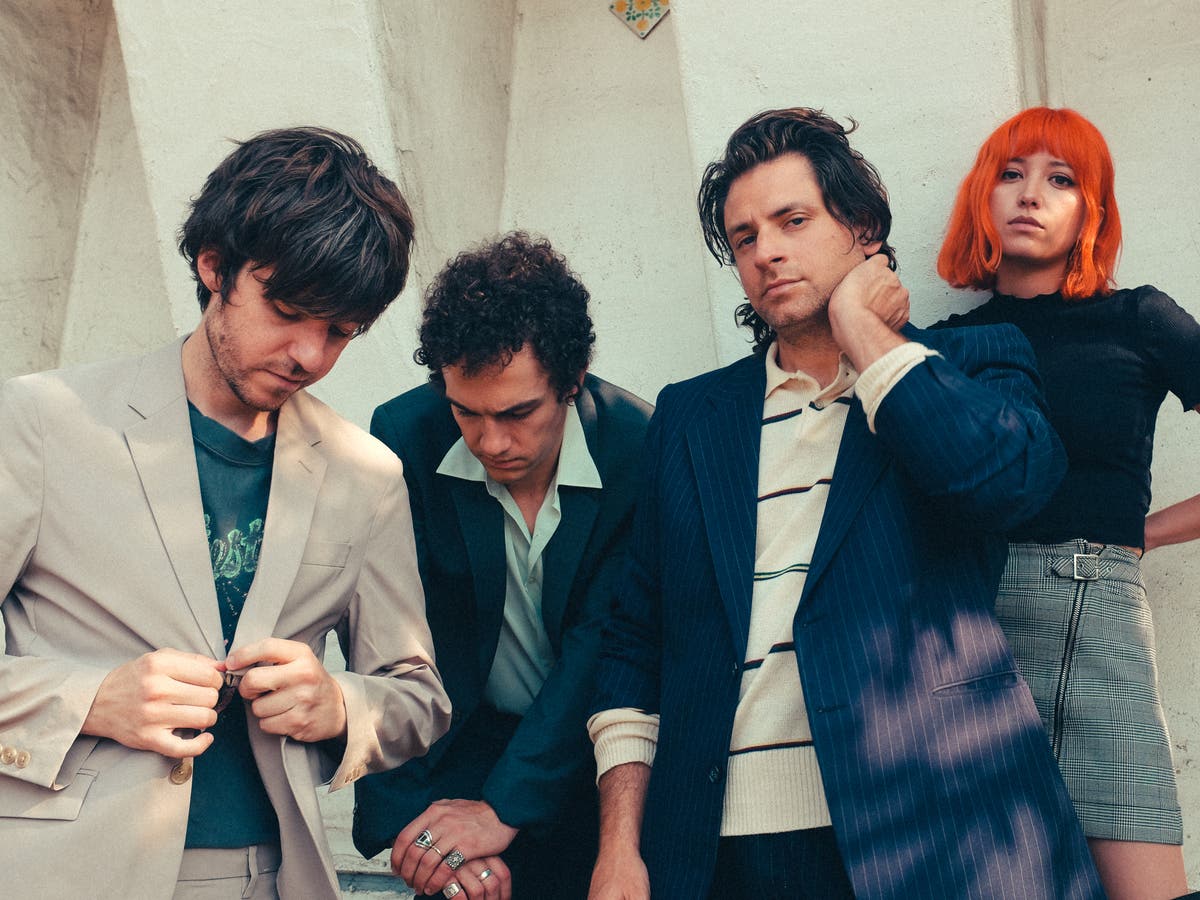 Lo Moon: “We lost a lot during the Trump era”

Lo Moon knows a thing or two about starting over. The Los Angeles-based quartet have been put to the test by the music industry: signed to a major label, mired in contracts, and then forced to start over after things went downhill. Their story is not so much rags to riches as rags to almost but not quite. But now they’re back, with a brilliant second album and a lot to prove.

Their early music was eclectic to say the least. On 2016’s self-titled debut album, there were ambitious songs like “This is It,” with its creepy guitar notes and bold synth hits, and the sprawling “Camouflage,” on which frontman Matt Lowell’s vocals were drenched in reverberation. They had noodle saxophones (“My Monday”) and propulsive, nervous dance beats (“Wonderful Life”). It was probably a bit too much. Now they’ve cut things down for their new album modern life, an exquisitely cohesive record that maintains the cinematic quality of their music – without overwhelming the listener. “Dream Never Dies” features a delicate pattern of piano-note arpeggios, while “Expectations” makes the most of Lowell’s plaintive falsetto, amid an anthemic chorus of Springsteen-level proportions. Poignant closer, “Stop” has a touch of Americana thanks to dreamy slide guitar, as Lowell delivers the evocative lyrics: “Die here with all my beliefs/ Laying crosses on red winter leaves/ I know what that I know, I need to let go.”

Lo Moon is at the end of an arena tour supporting fellow indie-psych-rock dreamers The War on Drugs. Lowell and guitarist Sam Stewart sit outside a Nondescript bar in Paris, a stone’s throw from the Folies Bergere, enjoying the April sunshine ahead of tonight’s show at L’Olympia. They have a Lennon and McCartney thing: Lowell is rambunctious and quizzical, a quintessential New Yorker, while Stewart is quieter, observing our surroundings behind his round-rimmed sunglasses. The pair met after Stewart moved to Los Angeles from his native England in 2008, joining Lowell and bassist/keyboardist Crisanta Baker. Sterling Laws – a drummer for artists such as Kim Gordon, Olivia Rodrigo and The National’s Matt Berninger – rounded out the band.

modern life, released at the end of February, is the culmination of more than two years of work. Lowell describes it as “a labor of love and frustration”. Despite living within 10 minutes of each other, the band were strict in adhering to local lockdown rules, and much of the initial check-in process was done via video calls. But the themes explored by the album took shape long before. Songs such as the opener “Carried Away” are built from a confusing kind of nostalgia. Celestial keys orbit around acoustic guitars and determined percussion, reaching a swirling climax. Lowell sings in a weary, singsong sigh: “I feel lost in time and space/I faked the smile that’s on my face now because/Some are bought and some are sold/Like Mr. Rogers, bless his soul.”

“I thought a lot about my childhood,” Lowell tells me. “And about my parents getting older – they usually just ask bigger questions than I was on the first record.” In fact, the loss of innocence has been a theme in his work for decades. The first song he ever wrote was about 9/11, in his sophomore year of high school. Tracks on the new record, especially “Raincoats”, were influenced by Kurt Anderson’s 2017 book Fantasy Land: How America Went Wrong. “We lost a lot during the Trump era,” Lowell says.

A modern life was released via Nashville-based indie band Thirty Tigers, but their debut album was released by Columbia Records, which signed Lo Moon after the release of their debut single, “Loveless” in 2016. It taught them a lot. “It took about a year and a half to get out of the wreckage,” Lowell says with a grimace. “It’s almost comical how cliché it all was.” Stewart says the weather reminds him of a scene from the 2010 comedy Take it to the Greek, where the naive talent scout of Jonah Hill pitches an idea to the ruthless executive of P Diddy. By the time their debut album was released, the people who defended them had left the label. “That’s when we were like, it doesn’t make sense for us to be there,” Lowell says.

These difficult early experiences, coupled with life in Los Angeles, imbued the band with a healthy dose of skepticism about the industry. Stewart already had an idea of ​​what to expect, being the son of Eurythmics musician Dave Stewart and Bananarama’s Siobhan Fahey. “I didn’t really know what else to do,” he says of the path he chose. “I was in a band growing up – we disbanded. I followed my brother [Django] and my dad in LA. It wasn’t even a choice…I just don’t know anything else. His attitude, and that of Lowell, of feeling drawn to music by an invisible thread, is certainly at odds with the ruthless ambition of their Los Angeles peers.

“The scene there is built around the industry, which makes it pretty sad,” Lowell says. “It’s like a group of songwriters trying to write the greatest songs they can write, and everyone is like, ‘I’m going to be the greatest artist of all time. And I have need everyone to help me get there.” Stewart mourns the once-thriving indie scene in Echo Park, where he lived, which has been “gobbled up” and turned into “quasi-indie-folk-pop stuff.” thing most people in Los Angeles have in common is that they move there to ‘get by’ in one way or another,” he says. “All now, that Whether it’s streaming or how many likes you get, it all seems so stat-based. And it’s really hard not to pay attention to it.

“It seeps in,” Lowell acknowledges. “Everybody’s waiting for their Olivia Rodrigo moment, and it’s not happening. Especially not for the bands. But they don’t care. “The artists that we love and admire, their careers have never been like…” He points straight in. “We’ve learned a lot about our strengths over the years, and it’s a lot more important to us. Now that we’re doing it ourselves.”