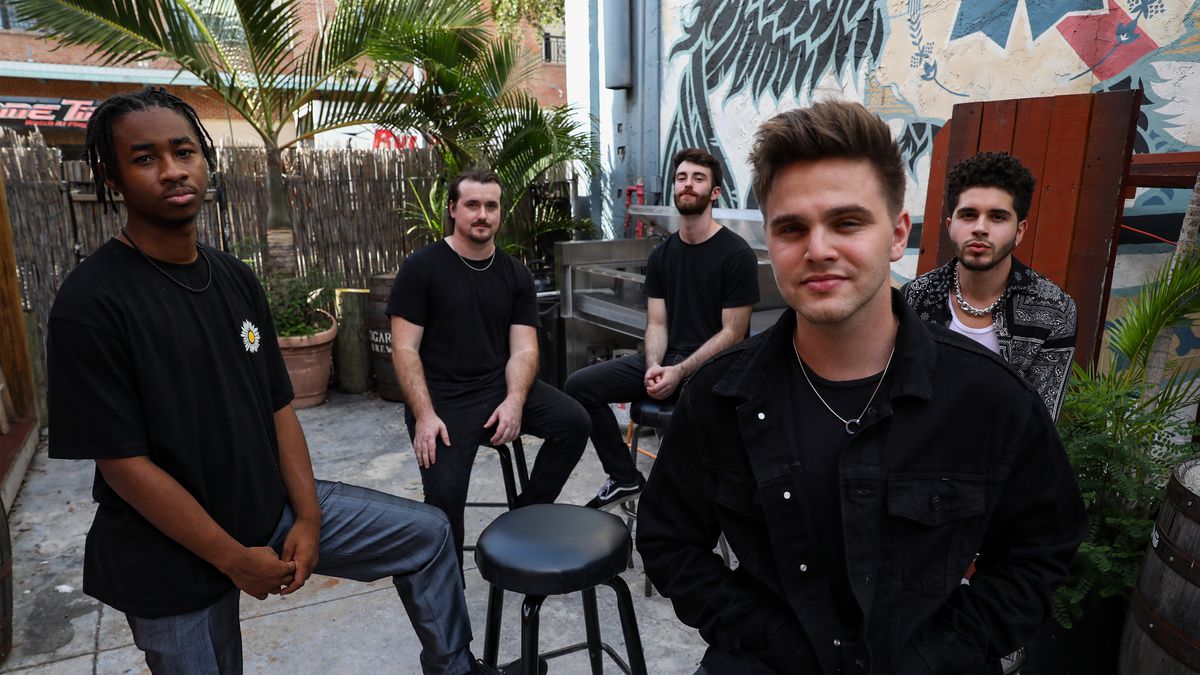 Meet Miróux, an indie band from St. Pete with a growing following

TAMPA – Five young men brought together by a love of music, each bringing something different to the table, merging minds to create a sound all their own. This is the story of Miroux. Or at least the one the band recounts on a scorching summer evening before a gig at The Crowbar in Ybor City.

The group, in its first iteration, debuted in 2015 with Dutch and a whole other group of people. They had a little run and played 97x’s Backyard BBQ in 2016. Soon after, Hollander found Siaca and the band released their 2017 EP “Transparent”, cementing their alternative electro-pop sound. But when some band members went to college, they took a break.

Hollander and Daw began producing music together through St. Petersburg College’s Music Industry Recording Arts program, won a competition, and decided to continue the gig. Hollander also met Goodwin in college and they found Mendel through word of mouth.

“We kind of started a new band in a way,” Hollander says, “But it’s the same…”

Miróux’s sound is reminiscent of classic bands like the Beach Boys and the Strokes, other five-man bands that blend a variety of styles. More recently they have turned to Young the Giant and Foster the People for inspiration.

They were just starting to get things done when the pandemic brought Tampa Bay’s live music industry to a halt in 2020. Miróux — Hollander’s middle name with a ‘u’ and ‘x’ added for whimsy, says -he – took the time to develop his skills, then played his first show with the current members in 2021 at a college party. They only grew from there, performing at Tampa’s Brass Mug and then at St. Petersburg’s crown jewel, Jannus Live.

“Jannus Live has been a little local dream for me to play since I was young. Little did we know that a month or two months later we would be playing at the Amalie Arena in front of 20,000 people,” Hollander says.

It’s true: a new band with less than 7,000 monthly listeners on Spotify has secured a gig at a venue home to some of the biggest names in music. How? Earlier this year, Miróux submitted a clip of themselves performing in an online contest. The winners would serve as Bon Jovi’s opener for their show in Tampa in April.

“A month and a half passes. It’s 12 at night, two days before their show in Amalie and I got the confirmed email and it’s like we’re freaking out,” Siaca recalled.

Are you planning your weekend?

Subscribe to our free newsletter Top 5 things to do

Every Thursday, we’ll give you ideas for going out, staying at home or spending time outdoors.

You are all registered!

Want more of our free weekly newsletters in your inbox? Let’s start.

Explore all your options

“I had to call my parents and wake them up,” Daw said.

The group went into planning mode. They dropped everything, did a rehearsal that day, and checked that all their gear would work for such an intense setup. Before nerves could set in, they were backing a U-Haul straight into the building, watching crew members with color-coded helmets unload for them. But they weren’t intimidated.

Their next show brings them back to more humble roots. The band returns to Jannus Live on August 22, when they will open for Andrew McMahon in the desert at 97X’s Shindig. This time they have a brand new single to show.

“Like This” draws you in with clean vocals and guitar playing, quickly escalating with a powerful bass line and techno undertones. It has memorable lyrics and a catchy tempo that will have you turning up the volume and rolling down the car windows. The EDM influence shines through but doesn’t overpower the care and creativity of the composition. It could easily be a radio hit.

It hasn’t been easy, however. The song has been in the works since 2017, a project started with the former band and shelved.

“It was a totally different song. It really didn’t sound like anything except the chorus. The chorus is what really stuck with me from the start. And the hook,” Siaca says.

They’re still figuring out their songwriting process, but now they’re trying to make songs as fast as they can when inspiration strikes. Miróux’s sound also continues to evolve as the band become more proficient as musicians.

The band wants to release a big EP or album later this year or early 2023. But it’s a balancing act. Miróux is their main project, but each member has their hand in other pots. Hollander and Daw produce music for clients, Siaca is a bassist for hire, and Mendel goes into software engineering. Goodwin has been in the production game the longest. They may not meet and rehearse on a set schedule, but they find time and they are consistent.

“I think we sound better than ever,” says Hollander.

Next on the to-do list: find a manager and agent, maybe plan a tour or hit the festival circuit and book gigs such as Lollapalooza, Coachella, Bonnaroo or Okeechobee. They seem a little hesitant to break into the TikTok music scene, but recognize that it’s almost a necessity these days. Continuing to grow their following on social media, in general, is always on their minds. (They have this Bon Jovi show to thank for a boost in their Instagram following.)

“Nowadays people can find clips of you performing live or see videos of that and stuff. They don’t have to be there in person to be like, ‘Oh, that’s a band I’d love to see,’” Daw said.

Still, playing live shows to cheer on local crowds is what Miróux likes to do.

“It’s so exhilarating, it’s so much fun,” Hollander says. “I would do it every day of my life if I could. I hope.

If you are going to

Miróux plays Jannus Live, 200 First Ave. N, St. Petersburg, at 7 p.m. on August 22. jannuslive.com. Tickets start at $25. Buy them here. Looking for other ways to support and follow the band? Follow their Spotify, Instagram or Facebook.