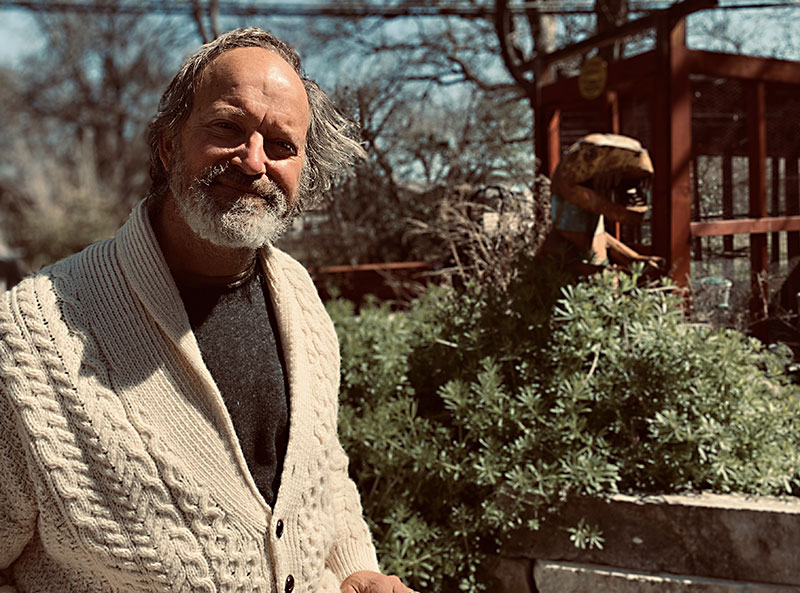 Wednesday is Song Circle night at the Cheatham Street Warehouse in San Marcos – a nice way to say “open mic”. There are about a dozen songwriters waiting to continue, and one of them is an older man who hugs his wife, leaves a drink on the wooden spool table, and takes the stage with the slight cuddled up with a retired athlete. Carefully, he sits down, holding his steel-string acoustic tilted vertically like a classical guitarist.

As soon as he begins to sing, the fresh-eyed newbie room, dotted with a few veterans and amateurs, bends over. There is a deep struggle in her voice, which sounds older than her 60s. It’s a voice that has seen empires rise and fall.

Plastic bags take the wind, they dance
Stretching wings as white as wedding dresses
I don’t know for years where you are, and I don’t ask
The revival must be over, the tents are falling

Named after a real, failed small-town attraction, “Corn Palace” is an ode to decadence, an elegy for the southern Minnesota farming community of Keel’s youth. When Keel sings that the “the corn palace will save this town“, you know it’s not.

Keel plays another original, reminiscent of Tom Waits in its most melancholic and sentimental form: “Soup Line,” the story of a youthful misadventure that began after his father passed out.

We fished in his pockets, found the keys to the truck
What I was hoping would be his wallet was just chewing

Cheatham is delighted. The keenest eyes are trained on Keel’s hands, to observe and learn. After playing guitar for years, most people forget how to play with such sincerity. Some people in attendance are considering getting a realtor’s license, because if a guy that good is still playing open mics, what chance do they have?

But Keel didn’t even pick up a guitar until he was 45, as something to do because he couldn’t play sports, especially his beloved hockey, like he used to.

And he can’t give concerts. Keel suffers from presbyphonia, a thinning of the vocal cords, which he likens to permanent laryngitis.

“I find it hard to sing more than three songs in a row,” he says. He’s only played a full set once before, “and I don’t think I will again.” He also struggles to play guitar without his orthopedic chair for more than a few minutes.

Sean Keel has been a research professor of mathematics at the University of Texas since 1989. “My music isn’t very well known,” he says, “but my work in mathematics is quite well known, to an admittedly small audience.” If you Google “Sean Keel Live” the first three videos that appear are lectures on a topic where algebraic geometry informs applications in theoretical physics. More precisely, his field of study is the nine-dimensional Calabi-Yau manifold. “This theory,” he explains, “is one of the leading candidates to replace superstring theory as a unified field theory.”

There’s an almost religious zeal in his reverence for the little things, as if you could put a magnifying glass over a softball and see the entire universe.

You would think pushing math into the realm of metaphysics would be all-consuming, but Keel has always written creatively, encouraged by his mother since he was a child.

Keel discovered, only in the last years of her life, that her mother’s family had a small band that played in the small Irish towns where she grew up. “Her Bruised Hands” is one of many Keel songs inspired by her mother. Keel also has a family band called Bill the Pony, which grew out of the weekly jam sessions he hosts on the screened porch of his home which he calls the Breeze Terrace Free Zone. Wife Michelle, daughter Rosie and son Lukas mingle with traveling musicians and other friends to unveil material, compose new songs and perform. Keel mainly plays the flute, his first instrument, and sings on the three albums that Bill the Pony has released on his own. These albums have a lot of joy and variety in them; Keel’s sweet sense of humor shines through in songs like “35 Lines About 11 Cats” and “$100 Car.” Every song has heart-warming lines, and after one listen, you have a thousand jokes with this, in his own words, “rusty dinosaur.”

Keel is a poet who dances in the dark, and this is most embodied in his 2019 self-released solo album, Long ways until winter. There’s an almost religious zeal in his reverence for the little things, as if you could put a magnifying glass over a softball and see the entire universe. In the tradition of Townes Van Zandt and Guy Clark, he has a knack for honesty in every note and every word. His weathered voice injects humor into sadness and sadness into humor, as he sings about death and fishing and women and (foolishly) driving a truck on a half-frozen lake.

Next up is Keel’s first label. Stockholm-based Icons Creating Evil Art discovered him after hearing a song he submitted through the online artist platform Submit Hub. You give them a dollar and a song and Submit Hub forwards your song to people for a listen. Services like this can be fraudulent, no doubt, but sometimes the system works, and artists like Sean Keel can finally be heard by the right people, especially Carl-Marcus Gidlöf, owner of ICEA.

“He told me that the reason he got into the business was to promote people well outside the mainstream, and since his business was doing well, he decided it was time to act on that plan,” Keel explains, “He asked me if I’d like a record deal. Obviously I did.”

Scheduled for release in September, A dry and frightening blue is in the throes of loss, clinging desperately to what remains. With that voice of a quivering whisper, every lyric is a secret and Gabriel Rhodes’ production puts the songwriting on a pedestal, with understated pianos and strings throughout. The title comes from the lyrics of “Cool Old Men”, the story of a childhood friendship disrupted by the Vietnam War.

Michael Bull, who co-founded Bill the Pony with Keel, believes that in songwriting the words are secondary to the music, that the main job of the lyrics is to blend. But Keel reminds us that songwriting is one of the oldest. storytelling devices. The Iliad is a song.

Qatar calendar lists things to do in September: music, culture and art