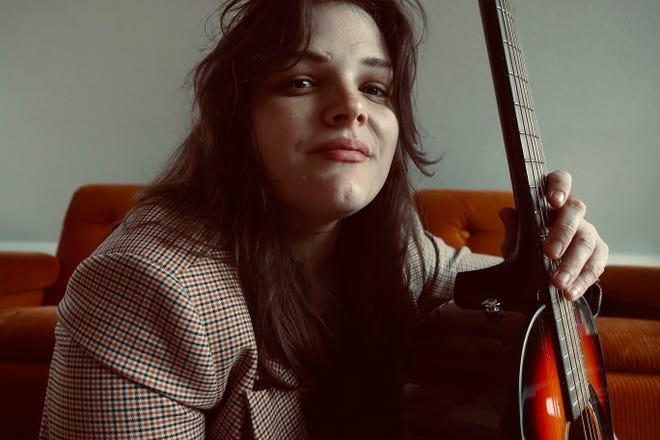 MILLIS – When it comes to huge and overwhelming life experiences, songs can be powerful coping mechanisms for listeners, as well as musicians.

An artist who spent her formative years in Millis is doing just that while reconnecting with her Massachusetts roots in her new single, “Manchester By The Sea.” which became available last Friday on all streaming platforms.

“You’re sitting on a rowboat in the middle of the ocean, alone, and that’s what you hear,” Maryanna Devlin said of the story behind her new track.

From the first chords, his melancholic and dark voice embraces you with this same notion.

For Devlin, 35, the song evokes the great loneliness of losing loved ones, and she hopes listeners will connect with that story.

“And whatever they feel next to that is a bonus, because I hope people can make associations with themselves when they listen to (my) songs,” she said.

‘Manchester By The Sea’ was originally written for acoustic guitar for a more ‘folk’ feel, she says, but after working alongside her producer, Chris Kling, it turned into a record. hauntingly beautiful independent.

The opening lyrics actually came to Devlin during meditation.

“Just out of nowhere, I started playing guitar and I just said, ‘I’ve been going up to old Manchester By The Sea since I was really young,’ and it was so random… (but ) I did with.” she says.

This song — and her writing as a whole — allows her to process difficult losses and things that have happened to her throughout her life.

She also sees this creative process as an “opportunity to take control of those emotions and decide that you’re going to invent a story to go with it.”

It’s the first of eight tracks from his upcoming debut album, “A Great Many Things,” which will hit all streaming platforms in September.

From acting to singing

Among his eight musical labors of love, Devlin plays his favorites: ‘Manchester By The Sea’, ‘Gary, Indiana’ and ‘Timeline’ – due out next month.

Devlin has been pursuing music since 2010, just two years after graduating from acting school in New York.

Since childhood, she dreamed of being an actress. Back in high school, Devlin was interviewed by the Milford Daily News for founding the Millis High School drama club and was the club’s principal. She graduated in 2006.

Devlin said she found no direction or inspiration in the classroom – despite her longing for that mentorship. She often felt misunderstood.

“I had to learn everything on my own and bring myself everywhere I am, and I’m proud of that,” she said.

Early in her career, Devlin turned to other artists.

“I’ve taken a lot of inspiration from other songwriters…especially Brandi Carlile and Josh Ritter,” she said.

A few years after acting school, Devlin’s roommate showed him Carlile’s music video for “The Story” and it changed his life.

Soon after, Devlin borrowed a guitar and began learning chords from a little booklet his mother had given him. A few weeks later, his talent as a songwriter was born.

In 2012, Devlin wrote and produced his debut EP — “Home Now” — on his desktop Mac with a $100 podcasting microphone and GarageBand, a music creation app that came free with his computer.

She kept the track raw, with no mixing or mastering, to show that she didn’t need any help. At the beginning of her career, she aspired to artistic independence.

“That’s why I’ve done all of this on my own so far and it’s probably to my detriment because it’s kept me from letting people into my music,” Devlin said.

Over time, she realized she needed help or no one would hear her music.

“I had to let them (producers and other musicians) into my life, into my world and it was really hard because… I had to let go, you know?” she says.

In December 2020, Devlin learned to let go when he began working with his producer at Klang Kantine Studios in Germany – his home since 2017.

“I felt like it was the right thing to do…in this world, you have to have people in your life supporting you or you’re never going to make it,” Devlin said. “I feel very good to have done it and happy to have developed.”

Alongside producer Kling, she completed ‘A Great Many Things’ nearly two years later. However, the journey to the finished album hasn’t always been easy with dealing with the pandemic, her other job at a preschool, and pregnancy.

“I’m not famous or anything, I don’t have a lot of money for that stuff,” she said. “I was still waiting for my paycheck so I could continue.”

Apart from finances, her pregnancy has also made it difficult for her to sing to the best of her ability.

Devlin is now on parental leave from her preschool job, caring for her 5-month-old son, Silas, while she schedules shows to promote her upcoming album.

Having her son also prompted the singer to consider returning to her home country.

“Since I got it I want to come back to Massachusetts and I’ve realized how beautiful it is and how much I miss that part of myself,” she said.

Devlin plans to stay in Germany.

She first moved for her husband, as it was his home. But, Devlin also said she “needed a change” and always wanted to live in Europe after traveling there in her early 20s.

Devlin will perform at Unicorn Festival 3.0 — an electronic music festival — on August 20 in Nürburg, Germany. Devlin said she was looking to book more shows in the Frankfurt area, but it has been difficult with her new baby and Germany’s strict COVID-19 guidelines.

While Devlin lives in Germany, many of her songs relate to her childhood in Millis and her family history.

“They (the songs) are inspired by my family because it’s my life…and I find the mundane things in life very, very endearing,” she said.

Throughout her life, she dealt with her father’s struggles with drug addiction and mental illness. At the age of 14, Devlin lost his brother, Andrew, one of his “greatest inspirations” in his career.

“He always taught me to be true to myself. He was also a musician, but he failed to pursue it,” Devlin said.

Grief seems to be an underlying theme in Devlin’s work. This emotion not only guided her creatively, but also gave her the opportunity to process her past trauma.

“It wasn’t always a smooth life…and when I started writing songs, I was like, ‘Oh my God, everything I needed to understand comes out’ – I didn’t even know that I had to do this.” she says.

Music has ‘100% been the way’ Devlin has faced and now writes about everyday life events that come to mind – which listeners will hear on ‘A Great Many Things’.

Going forward, Devlin plans to expand his songwriting and use this skill to write for other musicians.

“I always want to get bigger,” she said. “(When) I do my next project, I want it to be better than the last one.”