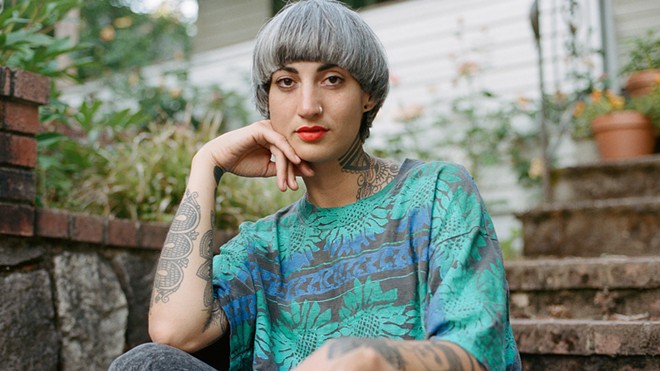 Luz Elena Mendoza is featured on the indie folk playlist.

Washington State University indie folk is a unique art exhibition for many reasons, including the nine-song soundtrack that gallery visitors will be able to listen to.

“I’m always looking for new ways to engage audiences,” says Melissa Feldman, indie folk art curator, who previously incorporated a soundtrack for a 2013-17 traveling exhibition titled Press play, with “playable” artwork. The idea of ​​music as a way to connect with viewers stayed with her.

Mississippi Records is an 18-year-old Portland-based record store and label that has released more than 360 small-edition LPs, mostly archival and many with handmade covers, according to Isaacson.

He immediately thought of Dragging an Ox through Water, aka Portland musician Brian Mumford.

Mumford plays songs that are modally similar to old folksongs such as “Man Of Constant Sorrow,” Isaacson says over email, but “innovates by adding electronic textures and very oblique lyrics.”

Another of Isaacson’s instant picks was Dead Moon, a Portland-based band active from 1987-2006, whose songs were covered by big names like Pearl Jam’s Eddie Vedder.

“Most people in the rock/punk/indie scene in the North West have a story about one of the members of [Dead Moon]”says Isaacson, who considers them the greatest rock band of all time.

Isaacson also praises Michael Hurley, whom he calls an American original and whose song “In the Garden” is the first on the nine-song playlist.

“I’m putting this song first because it’s a great example of how a song can sound like it’s always been there… like it’s old… when in fact it’s pretty again,” says Isaacson, who considers Hurley a folk artist. , although Hurley considers himself rock, pop and country.

“I classify him in his favorite genres as well as in folk, because whether he likes it or not, his music mixes well with Irish music and the old-fashioned ballads he grew up with (folk ballads that were transmitted orally from generation to generation).),” Isaacson says.

Like Hurley, Luz Elena Mendoza’s upbringing also influenced her music, Isaacson says. She wrote “Ojos Del Sol” as a pop song, “but it’s the chord progressions and the style that reference the ranchera, bullfight, bolero and huapango songs she grew up listening to,” he explains.

“The performers all trace the music back to their ancestors and communities,” says Isaacson, who also contributed the introductory text and short biographies of the musicians included in the exhibit.

“I tried to feature musicians in the tracklist who worked along the same lines as the artists featured on the show,” Isaacson explains, adding “songs rooted in tradition but also with an individualistic and contemporary edge… and all very DIY, Northwest-specific to the region.”

Later in the spring, look for a collaboration between Mississippi Records and WSU to bring several of the playlist’s performers to the museum. ♦

“Baby Where Are You”

Dragging an ox through the water,