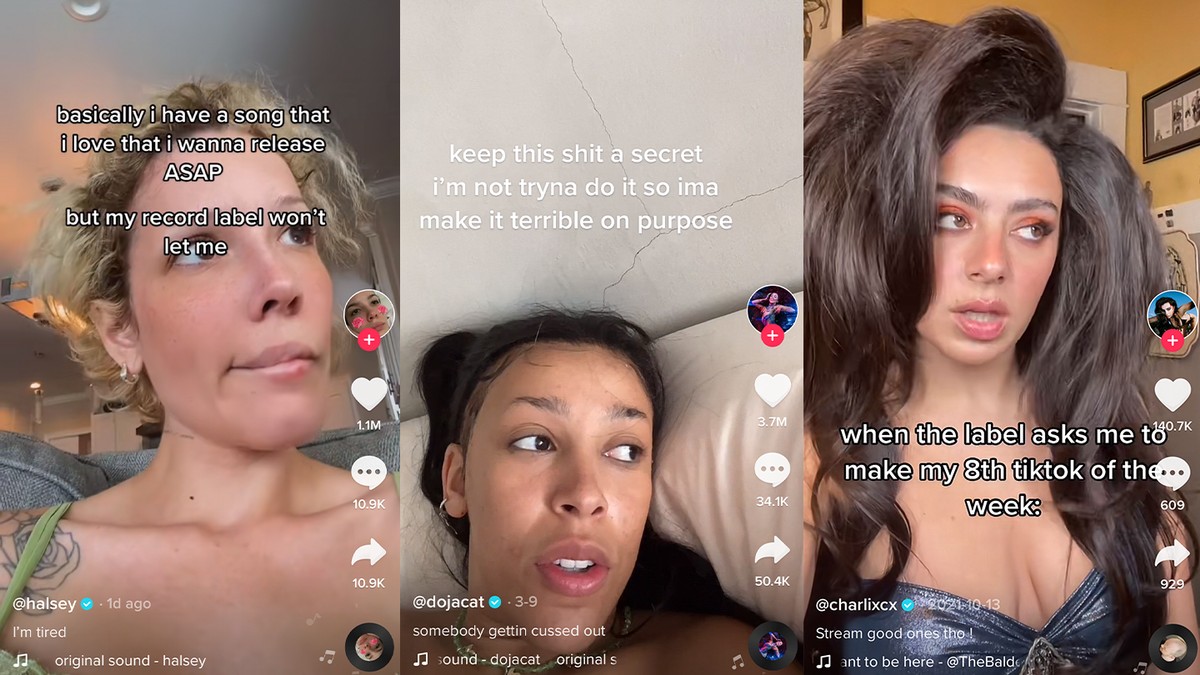 Musicians are suffering on TikTok. Do they have a choice?

Halsey, Doja Cat, and Charlie XCX have all shown their displeasure with the app.

In the first half of 2022, a slew of artists complained about an age-old phenomenon: their labels and marketing teams, desperate to promote new music, are insisting they appear in the media. The difference, this time, is that the heart of these conflicts does not rest on an individual but on a platform. TikTok, they say, is ruining them.

From Charlie XCX to FKA Twigs to Halsey – what started as a platform that helped videos organically viral with silly dances and witty role-playing has become the battleground for what promotion means for the artist and the labels that pay them, as we move into a new era of digital curation.

For those who see their music as an innate release of emotion and art, deaf to the ears of commodification, TikTok is a divisive promotion platform: a tool that, more than any other social media platform, removes the illusion that they are an independent artist. There are no social media managers, designers, or machinist artists who can quite understand what a great video on TikTok should be: self-shot and self-made. It is therefore easy to understand why, in recent times, many musicians and creators have opposed it.

It’s a contentious fight between labels and artists – a fight that highlights a split in musical generations.

For young local artists, like Lil Nas X, who have made their fortunes from platforms like TikTok, this represents an organic shift in how the industry works. For others, it’s a dishonest tool to strengthen their connection with young fans, shattering the illusion of the otherworldly independent artist.

Singer-songwriter Halsey – who rose to fame when TikTok was still known as Musicall.y – is just the latest artist to reveal his distaste for the platform. A video on TikTok, where Halsey stares exacerbated at the camera, took aim at her label for allegedly holding back a single release until they created a ‘viral moment’ on TikTok.

“Basically, I have a song I like and want to release ASAP, but my record company won’t let me,” the screen read in white.

“I’ve been in this industry for 8 years and I’ve sold over 165 million records. And my record label says I can’t release it unless they can fake a viral moment on TikTok.

“It’s all marketing, and they do that for pretty much every artist these days.”

And while reaching the next generation of internet-savvy 14-year-olds involves selling yourself (it’s not a new phenomenon), it’s not just about graphics anymore. TikTok has taken center stage – and artists like Halsey aren’t so happy about it. Sure, social media has created a new way of connecting with celebrities — but that’s brought a new set of problems.

While in some ways TikTok has been a positive pipeline, established artists who join the app as strangers first see it as another ploy in a marketing machine that continues to take control of them.

A few weeks ago, Doja Cat made a TikTok about Taco Bell’s abandoned Mexican pizza. It was eye-catching and well put together – but scrolling through her feed and past uploads reveals the truth: she was put together by her record label.

“You have to shut up, you can’t tell anyone I told you that,” she says in a video.

“They want me to rap about Mexican pizza, so I want to warn you before you see this shit. Just know that it’s contractual. Hush. I know it’s bad.

Other artists, such as Florence Welch of Florence and the Machine, FKA Twigs and Charlie XCX also had their say.

While Halsey’s Tiktok went viral, the track they were desperate to release has yet to see the light of day.

“At this point I don’t know what to do because I told the truth about what’s going on and now I STILL don’t have a release date AND some of you think I’m lying about everything the fiasco. So I’m double fucked lol,” they wrote in a tweet.

Some conversations have pointed to a music industry that has become too dependent on apps like TikTok to do its own promotional work, while others question the validity and entitlement of the artists themselves.

“Labels are too lazy to promote these days so they want TikTok to do their job like magic,” one tweet read. Before another borders on the plot:

“No, but why are they all suddenly so outspoken?” These fake sobbing stories are the real promotional lmao,” reads another.

In recent years, labels like Universal have also signed deals to cross-promote artists on TikTok. It is a method in line with the budget – a cheaper alternative to other forms of promotion. Influencers have also been paid to dance to artists’ songs.

But in the wake of the stars created by TikTok, labels are working desperately to cling to a phenomenon that previously didn’t involve them. There was no label pushing Lil Nas X – that came later. What if, instead, they were there from the start? This is the world the corporate music giant seeks to build.

It makes sense. But that becomes a problem when that level of control is thrown at an already established artist.

In the 1980s, the Buggles told the world that the video had killed the radio star. It was an ode to the generation of kids who would never experience the follies of the past, but instead pioneer the technological future. When MTV entered the fold, popularizing the music video – which some saw as a method of marketing rather than art – bands like Pearl Jam were quick to show disgustbelieving that the video took away the audience’s ability to have their own interpretation of the music.

While TikTok marketing and music video marketing are decades apart, they share the omen of being a next — and sometimes unwanted — step in the industry’s progression.

For now, it’s a nascent moment in the fate of the industry, lifting the veil but also muddying the waters. And it’s hard to decipher what is and isn’t marketing – or whether the artist is in it or not.

Perhaps this is simply an example of an out-of-town artist mentality, unresponsive to a new way of doing things, with more established artists unsettled by the possibility of having to reach younger audiences with new means. After all, it is a new form of commodification, which some would say runs counter to the innate nature of this Art is supposed to be.

For a younger generation of artists making their way around the world, however, it seems to be working.