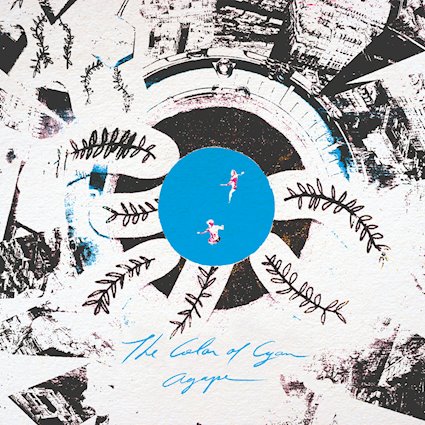 Apparently, at one time Chicago-based band The Color of Cyan was a more forward-thinking band, but they seem to have deigned to erase past work from memory. Now the focus is on two things: perfect guitars and beautiful ambient production work. The result is their, for all intents and purposes, debut album, Agape, and with the level of mastery displayed on this LP, it’s hard to imagine they were doing anything else.

Since the Google slate has been wiped clean of all previous work, it’s hard to speculate what The Color of Cyan looked like before 2020 with with Agape absolutely brimming with emotive and masterful guitar work, soaring atmospheres and analog drumming, there’s a lot to watch and enjoy on this album. The group says the shift to vox-free work was inspired by COVID, both from a practical and philosophical standpoint. The album was recorded by the various members of the group in quarantine in Chicago, Mexico City and Puerto Rico, the group had much the same spell of working remotely as other musical artists. Of course, they could also have recorded vocals remotely, but it seems the music spoke for itself in this case, and so they just went along with it.

Based on shoe gaze, post rock and cinematic ambient electronica, The Color of Cyan focused on the atmosphere with Agape and seemed, even physically separated, to find an emotional way to connect them to each other and the world at large. He’s not a cheeky hipster ratatatguitar/electro style album. The guitars are largely metal-based, especially in terms of the skill level of Eduardo Cintron, who also did most of the production. The composition, however, is much more inspired by a wall of sound, so the overall effect of the analog artwork sounds more shoegazey, especially when the ambient electronic artwork is applied. Think of a warm balance between early and late time Brian Futter from Catherine Wheel when it comes to guitars.

With those heavy guitars filling the staff almost completely, the composition of most of the tracks on Agape has also been clearly traced in a manner similar to a classical score. It was a smart move, as it opens up space for Henry Cole’s equally masterful and surprisingly jazzy drum work, Jorge Santana’s heavy bass and Rene Torres’ creepy strings.

These Torres strings add to the classic/post rock feel of tracks like “Summer Days”, lead single “The Day We Met” and epic eight-minute title track, as does all electronic sound design. This is one of the main ways The Color of Cyan will appeal to EDM fans, as it’s clearly all about setting the mood. Guitar music is often just about guitars, but here Agape, they are just as much about creating an emotionally charged atmosphere as the rhythms, lush strings and actual electronic atmospheres. The result is a grand, theatrical experience that is the sonic equivalent of the Northern Lights: breathtaking, evocative, constant and ever-changing.

This constant but ever-changing sense of Agape seems to be both what inspired the members of The Color of Cyan and what they want audiences to take away from it. The guitars, atmospheres, grounded beats and soaring melodies are only to connote what many of us have achieved over the past two years, best summed up by the band themselves:

Agape is our journey through this world. Even though the moments are unique for each of us, we are all bound by these feelings

Agape is now available and can be steamed Spotify or bought on band camp. Check out more videos, including the recently released “Inception” music video and a recording session with Cintron on The color of cyan YouTube channel.