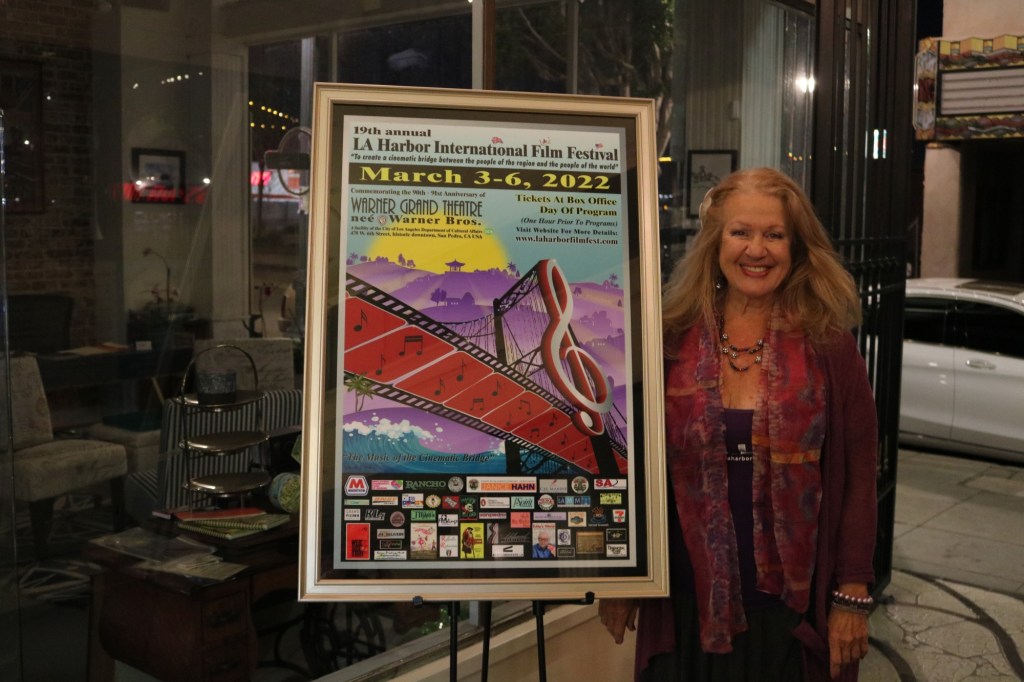 The LA Harbor International Film Festival, at the historic Palace of Cinema in downtown San Pedro, has had a rough few years, the pandemic interrupting it in 2020 and forcing it to go virtual in 2021.

But the 19th annual event will return — live and in person — later this week, founder and organizer Stephanie Mardesich said.

The film festival will run Thursday through Sunday, March 3-6, at the Warner Grand Theater, with several all-time classics among the lineup of offerings.

‘Treasure Island’ (1950), ‘West Side Story’ (1961) and ‘The Sound of Music‘ (1965) will headline this year, along with original shorts and a screening of a segment of ‘Stories of Los Angeles Harbor Area”, co-produced by Mardesich and Jack Baric.

Mardesich, full of pent-up energy and displaying her usual upbeat outlook, is counting on audiences being ready for an old-school cinematic escape after two years of pandemic restrictions.

Reminiscing to the tunes of “The Sound of Music,” she said, this year’s themes will speak to the challenges the world has endured, including the latest upheaval, the Russian-incited war in Ukraine.

“The lyrics don’t leave you,” she said of the classic film. “You have the story of Maria and the Von Trapp family, how they ‘climbed all the mountains’ to leave Austria when war broke out.

“There is hope,” she said. “And it’s a weird timing with what’s happening in the world today with Ukraine.”

Some free tickets will be available this year, Mardesich said, adding that his goal is to attract more people after a two-year hiatus in in-person shows.

“We’re like the Statue of Liberty of film festivals,” she said, “bring us your weary, your poor, your huddled masses yearning to breathe free.”

The San Pedro Theater has been the home of the festival since its inception, but it will soon undergo changes that will shut it down for a year. The Warner Grand is set to be closed for renovations from the fall, making it difficult to plan for next year’s film festival.

“People are excited” to come back, Mardesich said. “They yearn to go somewhere and do something.”

The 2020 show was cut short due to the initial pandemic lockdown. The festival screened just one film, and in front of an audience that dropped from 700 to an expected 70, leaving the festival scrambling to recoup licensing fees.

The following year, the festival continued but in a virtual format.

And even with the pandemic seemingly, for now, receding, his presence will be felt at this year’s event.

Tickets will only be sold at the box office one hour before the performances. The event’s typical online ticketing process has been complicated due to vendors’ struggles to fully get back up and running after the pandemic.

The availability of popcorn at the theater’s snack counter is still debated by city officials. But, Mardesich said, alternative snack plans are made if necessary.

And to accommodate those who may not yet feel comfortable going out to the theatre, this year’s offerings will be offered online via livestream, an option that was kept behind the scenes at the start when prospects for Live shows still seemed uncertain.

Mardesich started the festival in 2003 as a way to honor the art of cinema.

A graduate of USC film school, she focused on the behind-the-scenes aspect of production. His industry contacts have brought special guests to various events over the years and facilitated the acquisition of authentic 35mm prints for display.

“It’s the right story for this year,” Mardesich said. “It’s an adventure story that takes people out of their (limited) space.”

The goal of the festival, she says, is simple:

“It’s about celebrating the cinematic arts.”

If you are going to

Cost: General admission, $10; seniors and students, $8. Payment only at the cash desk on the day of the screenings.

Sign up for The Localist, our daily email newsletter with handpicked stories relevant to where you live. Subscribe here.