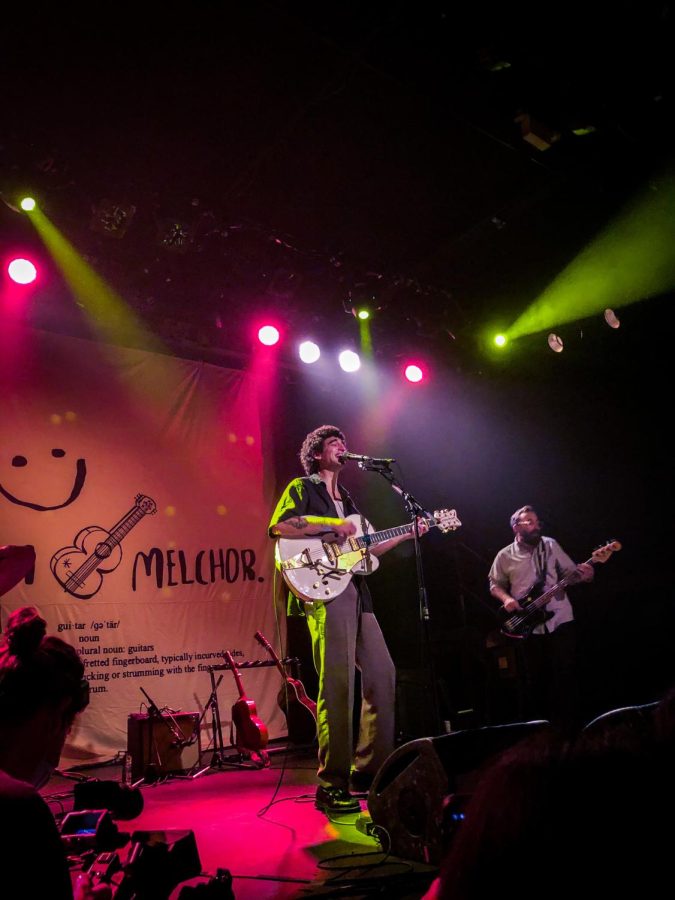 The haunting melodies of Adam Melchor

Anxiously looking at my phone, I crossed the street towards the trendy venue, Williamsburg Music Hall, where a single fan sat against the building’s rolling metal hardware.

As I approached her, I asked her if she was there for the Adam Melchor concert. Following the confirmation, I sat down next to her. Moments later, two people around my age walked over to our makeshift line and introduced themselves as Melissa and Liam. Melissa asked me where I went to school, and a surprised look lit her eyes when we found out that we were both students at Fordham Lincoln Center.

I found out it was Melissa LoPiccolo, FCLC ’24, also known as indie-pop artist Melissa Joy. Melissa also calls Melchor her â€œcomfort artistâ€ and after the gig told me that â€œevery song he has feels like it’s being sung directly to me.

Meeting Melissa was an alignment that calmed my nerves as a solo concert goer. I immediately felt more in tune with why I went to the concert – to hear songs that helped me and many other Melchor fans through an otherwise dull year marked by the pandemic.

To establish a sense of normalcy during 40s, in February 2020, indie-folk artist Adam Melchor created a phone number to text his fans a new song every Sunday. The phone number has been dubbed the “Lullaby Hotline,” now the title of her debut album with freshly mixed songs, some of which were played on her show in New York on November 5.

Along with the song’s Sunday release, Melchor often broadcast live. Streaming has become a way for fans to connect with each other over Melchor’s verbal antics and acoustic anthems.

Moments later, the VIP line separated from the general admission ticket holders, and I found myself in the small room staring at the stool where Melchor did his acoustic ensemble of songs from the streams and the hotline.

â€œIf there’s one thing that always feels good, it’s doing something with someone else and going on a trip with someone. ” Adam melchor

During the VIP acoustic set, there was surrealism in the respectful cheers that followed the song “Happier Alone”, releases from Lullaby Hotline, as well as an unofficially released and officially released “Lactose Intolerant” mashup of “No Way of. Knowing “. After watching these songs through a screen for two years and chatting with other fans, it was inexplicable to me that such an intimate concert experience was possible again.

Once the opening act, Field Medic, came out with thunderous cheers sending him off the stage, Melchor entered with the glow of diffused colored lighting and performed through his fiery introductory song. â€œLast Time,â€ with hopelessly romantic rocker, â€œI Choose You.â€ Even in second row in the rushed crowd, I could hear cheers from friends, family and fans. Before the third song he stopped and beamed with gratitude, blurted out a multitude of thanks and claimed that he didn’t know what else to say and that he would probably never stop thanking us all. the night.

The whole show felt like watching a close friend throw the best party ever. The exchange and resonance with the energy of this night recall one of the texts of the Lullaby Hotline of September. Melchor played a song called “Honey”. Over the instrumentals he told his fans, “And if there’s one thing that always feels good, it’s doing something with someone else and going on a trip with someone. whether you know him as the love of your life or have never even met them once, this is a rare opportunity for us to feel what everyone else is feeling.

Adam Melchor’s main tour has proven its steadfastness by providing a cosmic level of comfort and connection within his fan base.

Short-term and other loans push banks’ assets to 58.51 billion naira