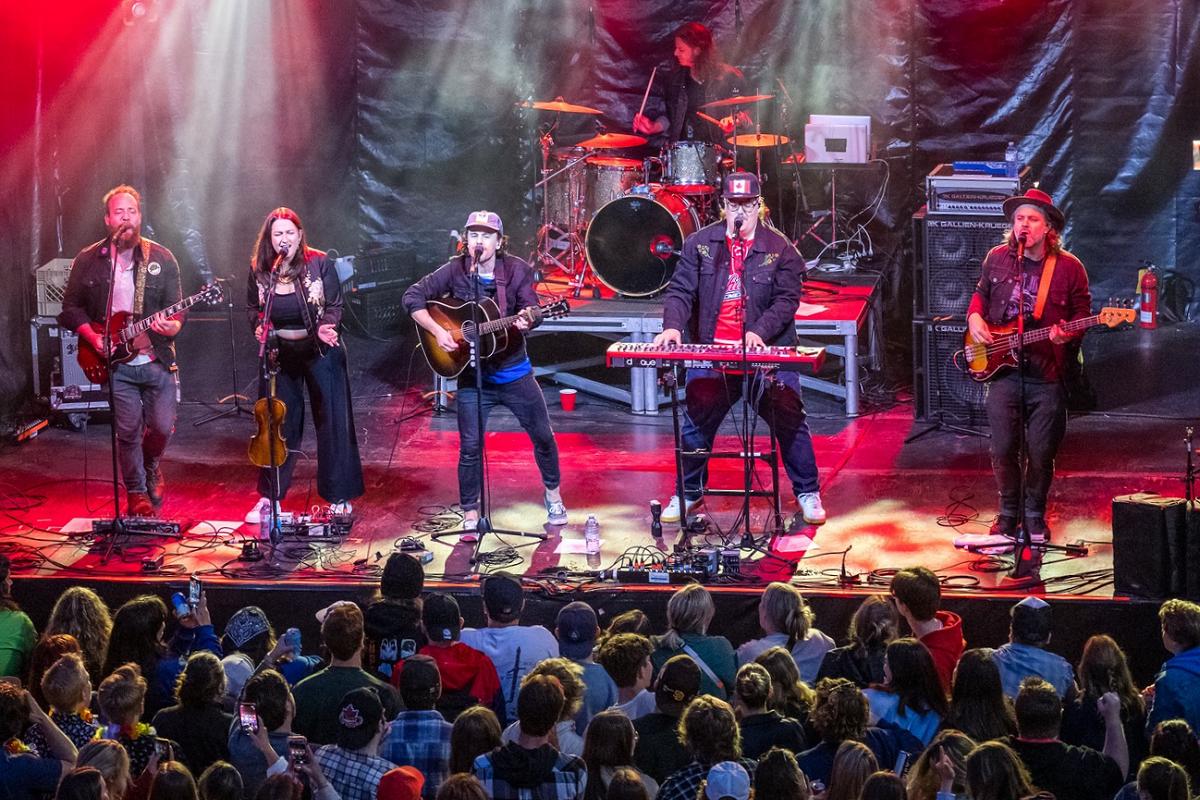 Fortunately for Canadian fans of indie rock music, especially those who found The Strumbellas very much to their collective liking, what happened in Lindsay didn’t stay in Lindsay.

Four of the band members — Simon Ward (vocals/guitar), Jon Hembrey (lead guitar), Darryl James (bass), and Jeremy Drury (drums) — hail from what is now part of the city of Kawartha Lakes, having made the decision long ago to pursue their musical talents in Toronto. It was a very wise decision as things turned out.

Following the addition of David Ritter (vocals/keyboards) and Isabel Ritchie (fiddle), who entered the fold via a Craigslist call for help, The Strumbellas quickly found their voice and rightful place in the crowded Canadian music landscape.

On Wednesday August 10, Peterborough Musicfest welcomes the Strumbellas to Del Crary Park as the 35th season of the festival draws to a close. Admission to the 8 p.m. concert is, as always, free.

Formed in 2008, The Strumbellas wasted no time keeping busy, releasing their self-titled debut EP the following year and subsequently performing at a number of legendary Toronto venues including The Horseshoe Tavern and Cameron House. .

With the release in 2012 of the Strumbellas’ debut album My father and the hunter, it seemed like everyone was talking about the band that blended elements of country, folk and pop with a rock anchor. The Canadian music industry also paid attention, in the form of a 2013 Juno nomination for Roots and Traditional Album of the Year – Group.

But what was denied to the Strumbellas in 2013 happened at the 2014 Juno Awards when the band’s second album, We’re still moving on the dance floorwon the statue in the same category.

VIDEO: “In This Lifetime” – The Strumbellas

Not content to rest on their laurels, the Strumbellas’ big breakthrough came in 2016 with the release of their third album Hope and, in particular, the first single from the album “Spirits”. The song topped the Billboard Alternative Songs chart for two weeks.

Having since been certified triple platinum in Canada and Italy, and gold in the United States, France and Belgium, “Spirits” earned The Strumbellas their second Juno Award in 2017 for Single of the Year and earned the band not only a number of prominent festival dates but also an appearance on The Late Show with Stephen Colbert.

When asked during an August 2017 interview with Canadian Beats Media’s Cassandra Popescu if she and her castmates foresaw the success “Spirits” would achieve, violinist Isabel Ritchie was quick to respond. “Absolutely not”.

“It’s just amazing to see where it’s gone and how it’s kind of moved around the world, and even in Canada, starting with smaller stations and moving to rock stations and then moving on to pop stations and seeing that evolve.”

VIDEO: “We don’t know” – The Strumbellas

“We love playing these upbeat songs live, especially in a festival environment,” she said. “It’s really fun, so we always have this pressure on ourselves to make fun songs that people can dance to but, naturally, a lot of the songs we write start off a little cooler. I don’t think we let’s do anything that pushes us out of our comfort zone or is unnatural. It all definitely comes from a natural place but we always have fun with optimists.

In 2019, The Strumbellas released a fourth studio album, Rattlesnakewith the singles “Salvation” and “I’ll Wait” – the first played on Late Night with Seth Myersagain exposing the band to a huge North American audience.

As the band’s fans await news of new music, last year’s release of single “Greatest Enemy” has satisfied their thirst for now.

However, fans also discovered in March that frontman and lead songwriter Simon Ward would no longer be touring with The Strumbellas, with Jimmy Chauveau (Ascot Royals, Kadeema) joining the band as their new lead singer.

“I’m just not cut out for touring to the same extent anymore, and while I love the band, I’ve decided to focus on my first loves: writing songs and being home with my family,” Ward said in a statement. “Taking a step back from touring will allow me to focus on that and more, and I’m excited for everything to come.”

Ward’s decision to stay behind the scenes with The Strumbellas came after he opened up about his struggles with depression and anxiety in a February 2021 interview with The Canadian Press’s David Friend — a difficult time that, at first, was forced the cancellation of a 14-city Canadian tour in January 2020.

VIDEO: “I will wait” – The Strumbellas

VIDEO: “The greatest enemy” – The Strumbellas

“It’s so easy to isolate yourself when you have mental health issues,” Ward said, a reference to those times on tour when he stayed in his hotel room while his bandmates gathered for the having dinner. “All you want is not to be with other people. So I’ll be on my own. I’m still working on my way and I’m struggling. I’m better now but, you know, sanity is such a tricky game. It seems to drag, come back and float.

Ward wrote “Greatest Enemy” after going through what he called “the worst year of my life.” In November last year, Ward also released his first solo album Simon and the Island – a nine-song disc that he hopes “comforts and encourages others struggling with their own mental health that they are not alone”.

“These songs are about my life,” Ward said in a statement. “Some of them are about my mental health issues, some are love songs for my wife, who is my soul mate. This album is about being in a dark place but seeing the glow of hope shine.

Overseen by General Manager Tracey Randall and her staff, a Board of Directors and numerous volunteers, Peterborough Musicfest’s stated mission remains “to provide diverse and affordable live music to enrich the cultural and economic prosperity of our community”.

For more information on this concert or the entire 2022 season, visit www.ptbomusicfest.ca or call the Peterborough Musicfest office at 705-755-1111.