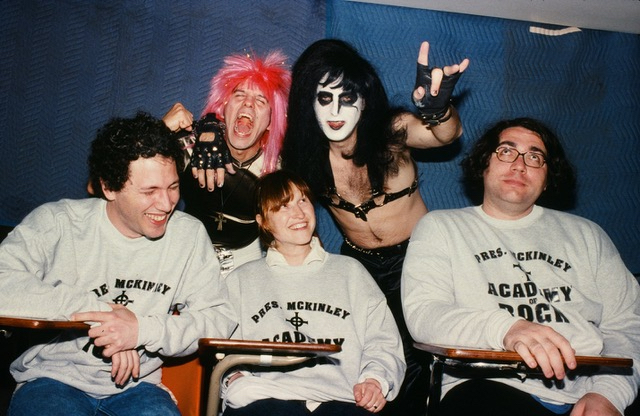 Yo La Tengo Check out the director’s cut of the ‘Sugarcube’ video featuring ‘Mr. Show’

Yo La Tengo marked the 25th anniversary of their album I can hear the heart beating like a Friday unearthing the director’s edit for their co-starring “Sugarcube” video Mr. Showis Bob Odenkirk and David Cross.

In the original video, the disc boss of Yo La Tengo (played by Mr. Show‘s John Ennis) sends the beloved indie band to the Academy of Rock, where Odenkirk and Cross served as teachers, doling out knowledge on what it takes to be a rock band, including lessons on way to trash a hotel room and a class on “Exhaustion vs Fading.”

“You’ll never play rhythm guitar for a small band that doesn’t even play at a festival,” warns his students, the inspired Misfits/Kiss teacher from Odenkirk. The newly uploaded “Sugarcube” video includes 30 seconds of never-before-seen footage that did not appear when the original clip was played on MTV (if it was played at all).

“I had a great time doing this! Mr. Show a reunion, of course, and a great song and script,” Odenkirk said of the video in a new statement. “We improvised these hard-rock clowns, perhaps my greatest ‘clown’ work, and we’d like to revisit and really dig deep who these two were – hair-metal goons!”

Additionally, Yo La Tengo also shared a conversation between the band and David Cross reminiscing about the video:

Matador Records will celebrate I can hear the heart beating in unison with a digital deluxe edition, out Friday, featuring a 1997 Peel session and era-appropriate remixes of the track “Autumn Sweater” by µ-Ziq, Kevin Shields of My Bloody Valentine and members of Tortoise. The 1997 LP will also drop August 12 on limited color vinyl, complete with an Academy of Rock sweatshirt.