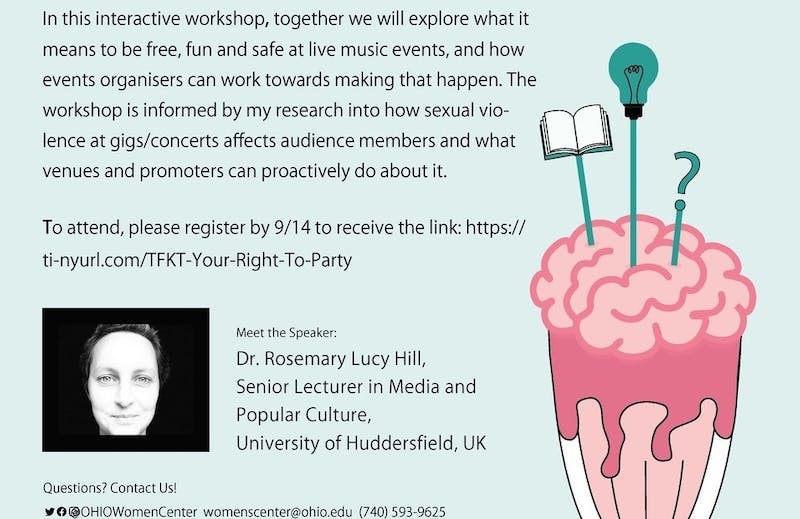 As part of Ohio University’s Red Zone training, the Women’s Center hosted the “Your Right to Party” workshop, an overview of how to make concerts and clubs safer for women and bands. marginalized.

The workshop was led by Rosemary Lucy Hill, professor at the University of Huddersfield, located in Huddersfield, England. Hill has worked with sites in the UK to update their policies on sexual violence, harassment and assault and help make spaces safer. She joined the participants via a team meeting on Thursday.

The program began with Hill asking attendees to recall their favorite and least favorite experiences with concerts and clubbing, as well as whether they felt safe during these events. From there, she presented her research on “healthy music audiences,” claiming that she interviewed venues and event planners as well as people who have experienced sexual violence at events.

In her presentation, Hill recalled a woman who described being fiddled with at concerts as “the extra price of a ticket” because it happens at every show.

Hill said his research concluded that more places need to start believing those who come forward and hold perpetrators to account without the report’s focus turning into a debate about its legitimacy. She said good policies are active with an emphasis on prevention and victim support.

“What we wanted to emphasize is the importance of freedom and fun,” Hill said in his presentation. “You can go to a concert and feel free, and then you will have fun feeling free. Without freedom, the pleasure is much more difficult to live.

Hill then introduced the website she helped create, Safer spaces, which teaches and encourages places to improve policies against sexual violence. This resource includes guidelines for places to approach sexual violence and examples of safety policies.

Geneva Murray, director of the OU Women’s Center, has completed her doctorate. with Hill and I was delighted to be able to invite him to speak with the students. She said this presentation had been in the works for months.

She said she hoped students would take an increased awareness when they were in clubs and concert spaces.

“I hope for both personal empowerment as allies and professional development as we need both of these to truly see a marked change in our society,” said Murray.

Em Sapp, a sophomore sociology graduate student who uses them / them pronouns, attended the workshop and said it helped them understand the unease some feel at events.

“From the workshop I learned how safer spaces in concerts and venues have already been implemented and how to implement them more in more spaces, as well as how other people in the audience may feel unsafe during concerts, ”Sapp said in an email. “It’s something I experienced from time to time, but telling other people about it made it more real.”

Sapp said they went to concerts frequently before the pandemic and were heavily involved in the alternative music scene. Despite their attachment to the genre, they too have experienced situations in which they do not feel welcome.

“As a non-binary AFAB person, I tend not to go to certain concerts where I think the audience would be more male-oriented, even though I’m a fan of that music,” Sapp said. in an email.

Lauren Mazzacone, a second-year biological sciences student, said she believes it is important to teach site owners, which was signified at the event.

“The girls will feel more comfortable, more secure,” Mazzacone said. “Every girl that comes out is like, ‘Can you go out with me?’ or “Can someone (is) sure take me home? It sucks that we still have to worry about it. “

Murray said the “Your Right to Party” workshop was an important part of the Women’s Center’s commitment to discussing the diverse experiences of survivors.

“Music is a source of joy for many of us,” Murray said. “What can we do to make sure these spaces are always cheerful, still provide what we are looking for and that people don’t have to choose between feeling safe and enjoying the music that makes them feel like a person?” whole? “

Thursday’s workshop is one of the many events that the Women’s Center is presenting this semester to tackle the “Red zone,” a period at the start of the school year when an increase in sexual violence occurs on campus. For more information on upcoming events, visit the Women’s Center Calendar.

Songwriter Delivers Meals and Music to the Community | New